Last Monday, we went to Zeeland again, this time to check out some Pink Flamingos on Lake Greveilingenmeer.  The last time I saw a flock of them was when I was in the Dutch Caribbean islands some years ago so I was quite amazed as to why how they would end up in the Netherlands.   So I did a bit of research.  Firstly, there are a few different species of pink flamingos.  The ones we see here are bred in Germany, and typically migrate to Africa in the colder seasons.   That said, these flamingos tend to migrate instead to Lake Greveilingenmeer because the water is apparently salty enough not to freeze.  And the lake has lots of crabs and shrimps to feed on.  Upon our visit there and taking lots of photographs, I got very much inspired to paint pink flamingos too!

And what is cuter than painting one with a baby one!  I didn’t see any babies when I was there because the flock was quite far and there were quite a lot of them, but I just wanted to do a cute painting of them.  This first one is quite a simple one which I firstly sketched with pencil. 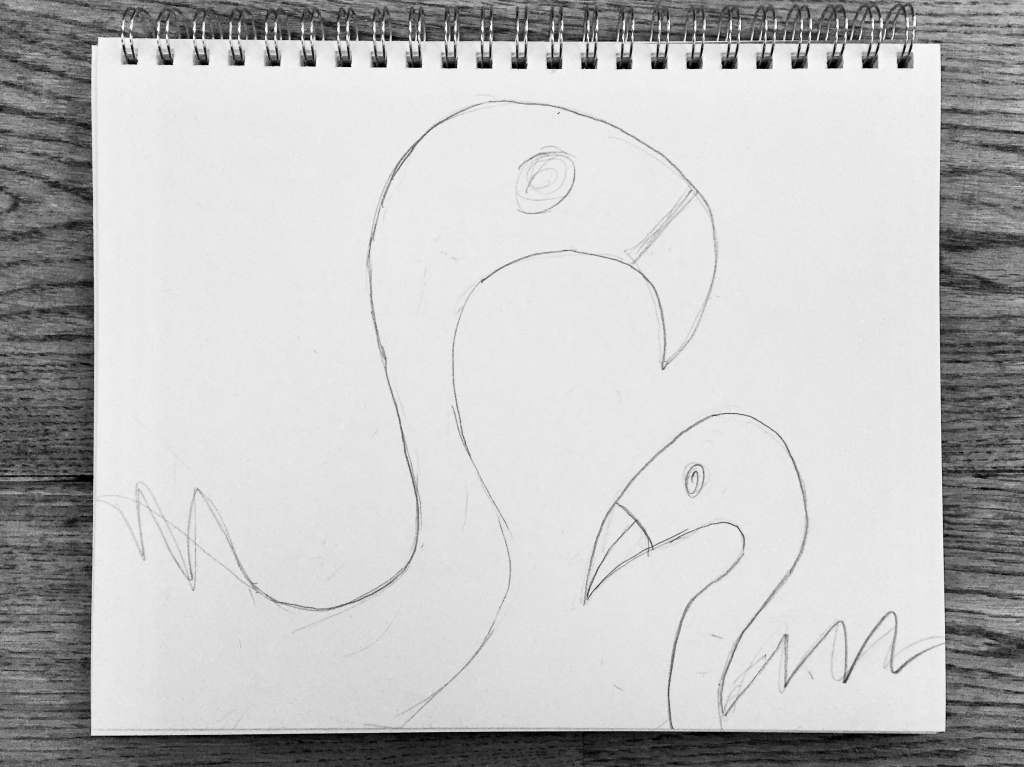 Then I worked on the background.  Firstly brushed on some water and avoided the flamingos.  I added some drops of grey Ecoline ink and let it spread out on its own.   For the sea, I did the same but used fluorescent blue acrylic ink instead just to see the difference.  The acrylic ink colours are more highly concentrated but the consistency the same.  As as such bolder tones.  Then I scribbled in some doodles with oil pastels before painting over them with Dylusions Rose Quartz but the paint is so matt that the pastels disappeared in the background.

Once the inks dried, I filled in the white gaps with silver acrylic fluid but since that was not as effective as I was hoping, I stamped in some iridescent India Ink in Black Sparkle with tissue paper.  For the sea, I scumbled in some cobalt blue paint, and painted the border in a turquoise.  Then painted the beak in.

The Flamingos were outlined with Ecoline pink pen, with the details stamped in with Staz-on ink in Magenta using some tissue paper.  An attempt was made with some stencil too.  Then I added in some details using markers.  I used sepia india ink for the eyes.

Today, I decided to make this painting a bit simple without much layering.  Great to do something simple for a change!  One of the reasons being that I wanted to focus on the vivid colour of the pink flamingos which worked out rather well.  Experimenting again with various inks and combining them with paint was also quite fun, and I didn’t want to ruin the beautiful effect by adding another layer.  I’ll be painting a few more pink flamingo themes, as I really love working with pink and seeing what other colours go well.  So keep your eyes opened for more!