Another recycling session! There is this sketch I made with a black marker about a year ago when I decided to start drawing again after decades. It is about a black cat who walked across my path when I was on my way to my boyfriend’s. At the time, I had a rather rusty recollection of the perspective theory (learned in school but forgot lol) . I mean look how lopsided the houses are. And the cat was drawn proportionally so large that it looked as if she could eat those houses! Now I can laugh about it and even create something interesting from this with my many paints, inks and accessories I have accumulated since!

So meet my Monster Cat. Emerged from this drawing in question. Though totally off, it is just too cute to throw away. It’s also a reminder of how far I’ve progressed since then. And could be a form of abstract art, right? So why not continue where I started off? The drawing was fortunately done with a Faber Castell’s marker which is of permanent india ink so could be coloured in with water-based paints without the risk of smudging or bleeding.

I began by brushing some water on the sky and road and topping it up before it got dry again. Then added a few drops of Dr. Ph. Martin’s Radiant Concentrated Water Color and spread the colour. For the sky, it was Turquoise Blue and True Blue, and the road in Lemon Yellow and Orange. A very little amazingly goes a long way as it’s concentrated, as the product name suggests. And as the name further suggests, comes out radiant!

The houses and the half-trees on the sides were painted with acrylic paint. To avoid making the painting too busy, I decided to make the houses uniform by using red (Dina Wakley’s Ruby) on the roofs and light pink (Amsterdam’s Light Rose) on the house. The doors and windows were filled in magenta aquarelle pencils then spread with a small wet brush. Same with the small green bushes. And the trees were painted in acrylic paint using one of Jane Davenport’s products, whilst the pavement was filled in with grey water-soluble wax pastels by Neocolor II. Finally, I painted in the foreground “puddle” with Gold acrylic paint mixed in Gloss Gel. 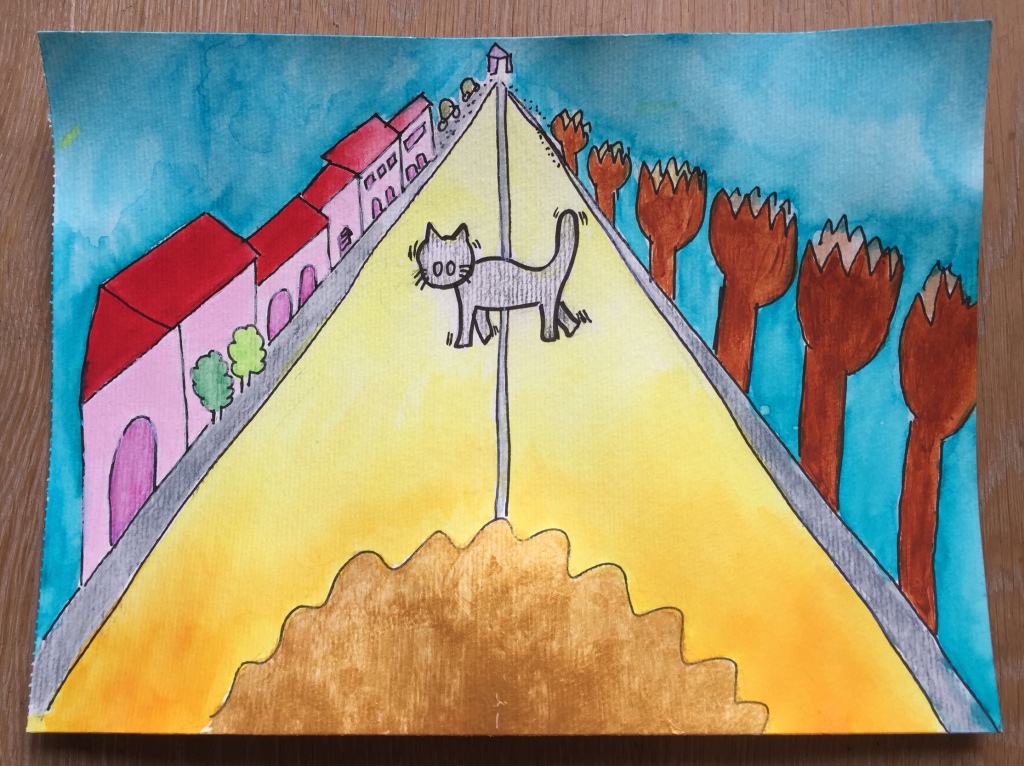 Once the painting in was complete, I continued further by adding some cool stuff. Stenciled in a school of birds in the sky with some Distress Ink lightly patted with a spongy applicator. I also glued some bits of origami paper in the golden puddle and on the front roofs of the houses. Then I coloured in the cat using black acrylic paint mixed with Modeling Paste for some texture and to make it the central subject. To tidy up the painting, I retraced the outlines with the same black marker.

Now is the time to add some details using various ink markers. The usual white Uni Posca pen for the eyes as well as squiggles and circles on the houses and pavements. Gold markers for the pond area, and coloured Paint Pens by Jane Davenport on areas such as the half-trees and details of the houses. Now I can say I’m finished!

I quite like how this “from drawing to painting” turned out. In fact, it’s actually more an illustration than a painting which makes it look more kawaii. I didn’t want to make this another simple colouring session as you get for colouring books and hence introduced more media like collage, stenciling and markers. Also an adventure trying out different mediums and discovering what is most effective for which area. This “mistake” drawing now looks pretty cool when filled in and could be an interesting abstract or surreal artwork. And now I shall call it Monster Cat. Pure-fect for Halloween!!