I don’t like wasting paper or painting material so whenever I sample a new product or am unhappy with the type of paper I have, I make some use of it.  Some time ago, I bought some pastel-purpose paper online and was totally unimpressed with it; it was thin and the rough holey texture was annoying.  In another words it was cheap.  But why discard it?  And then I recently bought some stencil and had a bit of leftover paint from the previous work so thought I’d test the stencil on this paper I didn’t like.  And then I decided to see what I can do to develop it further…. et voila! 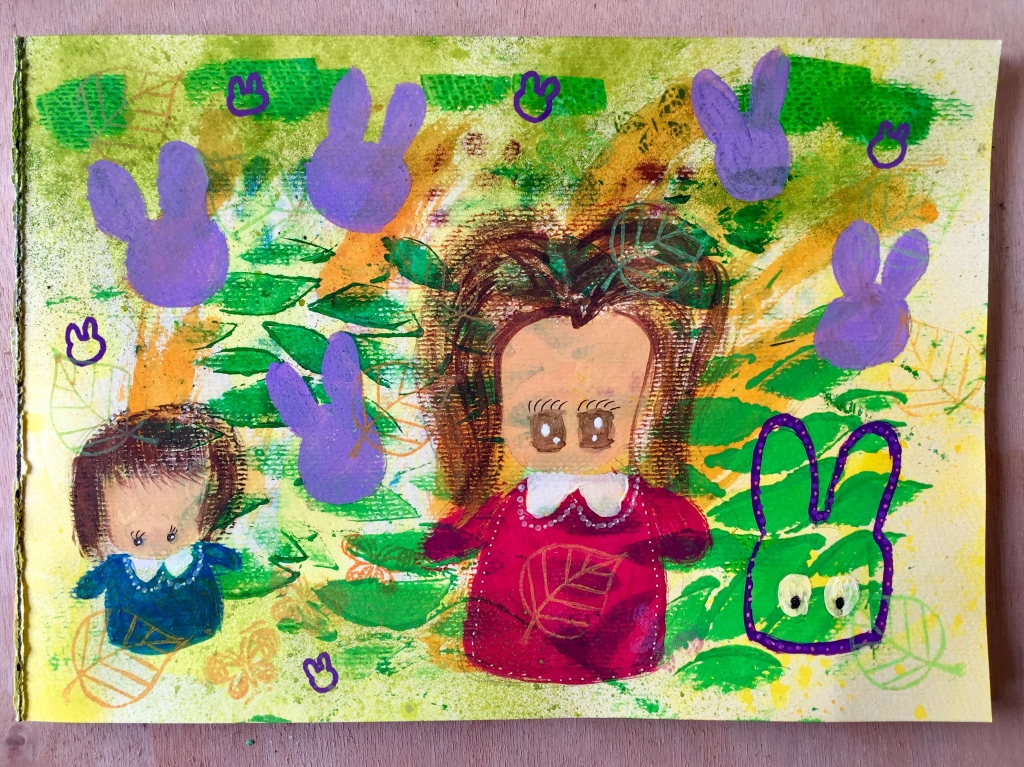 A typical layer by layer work which started from, as mentioned before, experimenting with a new stencil using leftover paints.  The paper not my usual thick mixed media kind but used for pastel drawing, and hence the bumpy texture .

I had the autumn leaves theme in mind so brushed on some orange and yellow Ecoline inks on top.  And great, I was pleased to discover that the ink did not smudge the layer below and still let the spots show through to give an interesting image.

I grabbed another stencil and began scraping some green paint on it with an old credit card, wiping down the excess with some kitchen paper.  At this point I was not too bothered with the paints bleeding since I was on my after the mood. Once dry, I began sketching in my design.

Mini Me again and a Micro Me standing side by side surrounded by bunny heads.  Can’t explain why I chose this but it all started with wanting to draw Mini Me again. Then thought, hmm, looks a bit lonely so I added a Micro Me. Currently being the change of seasons, this could well be a sign of growing a bit older too, from Micro to Mini, with the the bunnies representing innocence and hence resisting inevitable change…

So I proceeded in colouring the bunnies in Dylusions’ Laidback Lilac and decided to keep them as silhouettes floating around the background. No eyes, just simple silhouettes. And then I drew in some strokes in oil pastels outlining Mini Me and Micro Me, focusing on the hair. And painted the face too. 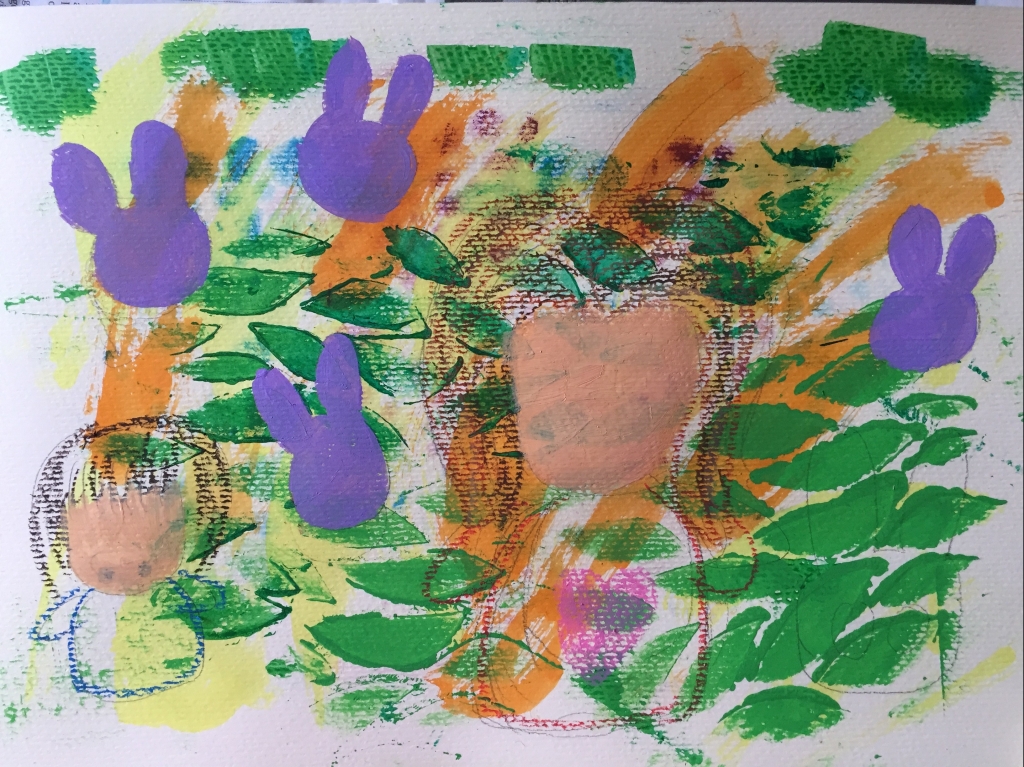 Once I finished painting, I added some details using stamped ink such as butterflies and leaves in orange and green to depict change to autumn. Using Uni Posca markers, I also doodled some tiny rabbit shapes and drew the eyes. Used gel pen for the details of the dresses. 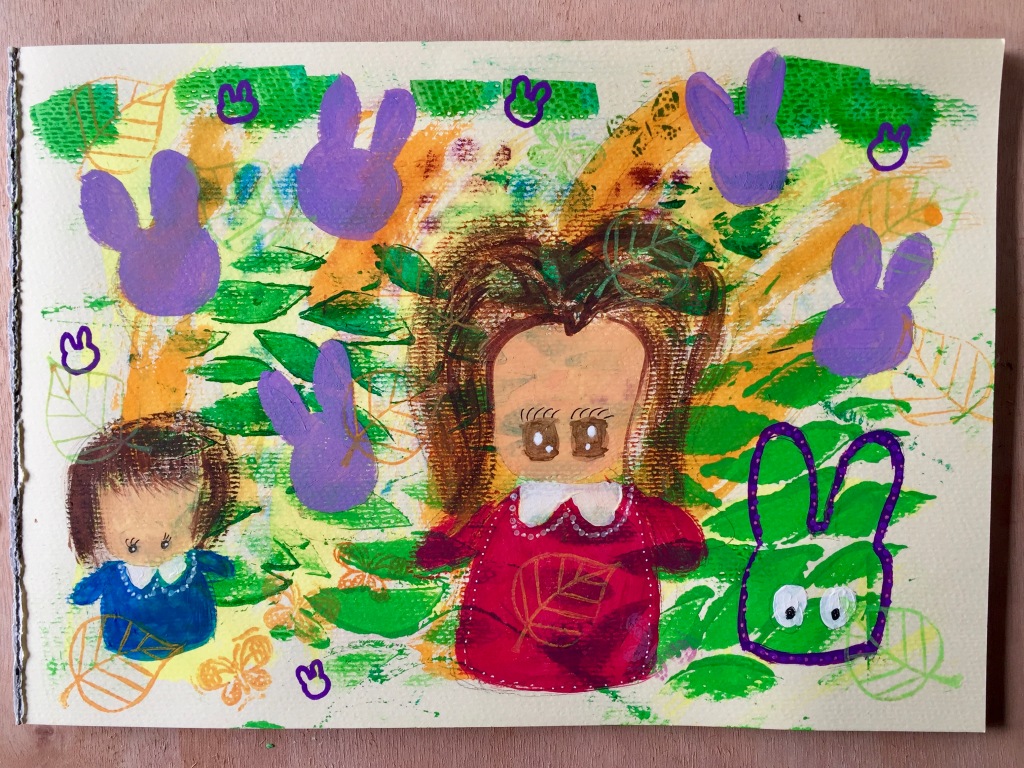 But I felt the painting was still incomplete! What’s missing? I couldn’t figure it out so slept over it and the next morning decided maybe lightly spritz a final layer of green ink spray! Covered Mini and Micro Me’s first so they don’t get covered unnecessarily. Now I can safely consider the painting finished for the time being!

I like doing spontaneous work like this. Just go with the flow without any strict planning. Another fun part is analyzing myself as to why I came up with this painting in the first place. For me again, it’s getting in touch with my childhood whilst reluctantly having to experience the inevitable change in life or as one would call it, metamorphosis.

🐈‍⬛ THREE LITTLE KITTENS. Over the years, I’ve come across quite a few little cats roaming in the neighborhood! Most likely they belong to neighbours and are let out so they can wander around freely. I’ve familiarized myself with a few of them because they are so adorable! There is naughty Ginger then Bram the grey cat that belongs to the lawyer downstairs in my old apartment and a random black one occasionally spotted by the local supermarket. And I thought this would be a perfect opportunity to practice some digital painting! 🐈
💙 CELEBRATING WITH CHAGALL. Sharing a painting I made whilst following Lesson 3 Chapter 4 of Tracy Verdugo’s Story Painting Class! We made a Chagall-inspired piece with the theme “The Art of Celebration”. 🎊 Whilst adapting his style, we were to choose a happy celebratory moment in our life. I of course had a few but the most recent that comes to mind is when my boyfriend and I decided to move in together and buy our dream house last summer! 💛
🐶 DOGGY WALKING DURING CURFEW. The curfew in the Netherlands is still continuing till 3 March. But those exempt include those walking own dogs! Of course dogs need to be walked a few times a day even at odd hours so perfectly makes sense. And so Little One enjoys walking her neighbour’s doggy! Her neighbour is a health worker and when she has the evening shift, Little One is happy to help out 🐩. As she walks, she occasionally comes across Ginger the naughty neighbourhood cat lurking in the corner. How cute is that! And now a little painting about it... 🐈
💕 Following Lesson 2 of Juliette Crane's Serendipity I classes now! Just finished this morning creating my "collage paper" which I will be tearing up and using for my main painting. But it's too cute to tear up... 😞
💜 VIOLET SKY. Sharing another digital painting I did a few weeks ago whilst following Maurizio de Angelis’ on-line class on Procreate! I guess I could have used it as a Valentine’s theme but I ended up using my mixed media painting as the “masterpiece” for Valentine’s 2021 instead 💕 . Not to worry, as my boyfriend always tells me, “Everyday is Valentine’s Day for us”! Now isn’t that sweet of him... looking forward to more lessons and practicing more so I can create more kawaii! ❤️
🐇 TWO BROWN BUNNIES. So just before the snow filled the farm across our back garden, we spotted two kawaii brown bunnies meandering in the field! 💕 I thought they would be hibernating during the winter so was quite pleasantly surprised to see them appearing the other day. And then that inspired me. Let’s see what happens when you paint with India Ink for a change! 🎨