More bunnies!  I must really be missing them because they are mostly hibernating during the winter of course.  And this was clearly reflected in this intuitive piece I created the other day.  As it has been quite a while since Gelli printing, I thought I’d give it a go this time.  Then take it on from there!

A page from Strathmore’s Mixed Media pad was used for this piece.  For Gelli plate, I went for a big round one and  applied some Distress Oxide Ink in Cracked Pistachio.   I then combined some other colours with it by immediately dabbing on some fluorescent green acrylic liner and bubble wrap imprints in gold Fluid Acrylic.  Then a brayer was used to spread the colours with the remaining paint rolled around the circle as ghost prints.  I then added more of the gold and fluorescent green.  And now we have a sort of moon, a green one with matching green universe!

So when I see a moon, what’s the first that comes to mind?  Rabbits of course!  This is because in Japanese mythology, which is derived from the Chinese, a rabbit lives on the moon.  What inspired this myth was most likely that the physical markings on the moon look like the outline of a rabbit   Consequently, I’ve done a few artwork in the past with this theme:  Rabbit in the Moon and Bunnies are Landing!  And now another one coming up!  With some fluorescent red acrylic (by ARA) and a light baby pink one (mixture of ARA’s iridescent white, fluorescent pink ink and Dylusions Rose Quartz), I painted in some bunny heads.  The paints were mixed with some Gloss Medium (Liquitex) for some shine as well as transparency.

In order to fill in some spaces on the corners, I stencilled in some spots by dabbing on some gold Full Body acrylic.  I had a positive experience using this method on another piece so thought this would be a great idea.  Not wanting to make the gold too overwhelming, I concentrated on the bottom part of the painting.  Some of the fluorescent green liner was dabbed on too, where the gold got a bit too much, and flattened with a brayer.

I liked how the pink and red colour of the bunnies complemented with the green background.  And with the gold, it looks beautiful!  However, I felt that the moon was no longer looking like a moon but more like a face!  Not what I was looking for.  That said, I wanted to add more but not paint, something different.  And hence I came up with gluing on some bunny-head shapes using pretty paper like the Japanese origami.  And how about a few in red?  I simply drew the shapes in pencil on the back of the papers and cut them out with some small craft scissors.  To make them the same size and shapes, I simply placed one of them on top of the other paper and traced over them.  After moving around the origami bunnies for perfect positioning, I glued them on with some Japanese rice glue.  And now, I think I am ready to say this is done! 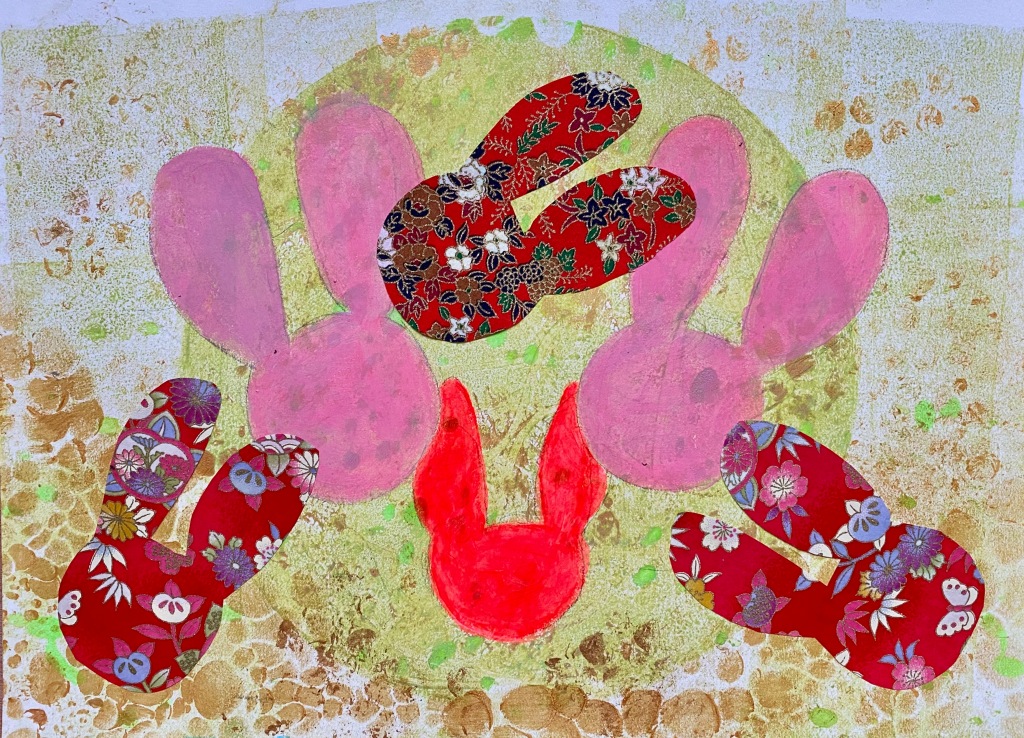 Another cool intuitive piece!  I wasn’t sure what to do with the Gelli print first but then decided it was going to be a moon and take it on from there.  First thing that came to mind were rabbits and then the ideas started developing.  Fun thing is, I wasn’t even counting on ending up with the origami paper shapes but now look how stunning it all looks!  I’m of course well pleased with the piece and am amazed what you can create when ideas develop without planning.

🐈‍⬛ THREE LITTLE KITTENS. Over the years, I’ve come across quite a few little cats roaming in the neighborhood! Most likely they belong to neighbours and are let out so they can wander around freely. I’ve familiarized myself with a few of them because they are so adorable! There is naughty Ginger then Bram the grey cat that belongs to the lawyer downstairs in my old apartment and a random black one occasionally spotted by the local supermarket. And I thought this would be a perfect opportunity to practice some digital painting! 🐈
💙 CELEBRATING WITH CHAGALL. Sharing a painting I made whilst following Lesson 3 Chapter 4 of Tracy Verdugo’s Story Painting Class! We made a Chagall-inspired piece with the theme “The Art of Celebration”. 🎊 Whilst adapting his style, we were to choose a happy celebratory moment in our life. I of course had a few but the most recent that comes to mind is when my boyfriend and I decided to move in together and buy our dream house last summer! 💛
🐶 DOGGY WALKING DURING CURFEW. The curfew in the Netherlands is still continuing till 3 March. But those exempt include those walking own dogs! Of course dogs need to be walked a few times a day even at odd hours so perfectly makes sense. And so Little One enjoys walking her neighbour’s doggy! Her neighbour is a health worker and when she has the evening shift, Little One is happy to help out 🐩. As she walks, she occasionally comes across Ginger the naughty neighbourhood cat lurking in the corner. How cute is that! And now a little painting about it... 🐈
💕 Following Lesson 2 of Juliette Crane's Serendipity I classes now! Just finished this morning creating my "collage paper" which I will be tearing up and using for my main painting. But it's too cute to tear up... 😞
💜 VIOLET SKY. Sharing another digital painting I did a few weeks ago whilst following Maurizio de Angelis’ on-line class on Procreate! I guess I could have used it as a Valentine’s theme but I ended up using my mixed media painting as the “masterpiece” for Valentine’s 2021 instead 💕 . Not to worry, as my boyfriend always tells me, “Everyday is Valentine’s Day for us”! Now isn’t that sweet of him... looking forward to more lessons and practicing more so I can create more kawaii! ❤️
🐇 TWO BROWN BUNNIES. So just before the snow filled the farm across our back garden, we spotted two kawaii brown bunnies meandering in the field! 💕 I thought they would be hibernating during the winter so was quite pleasantly surprised to see them appearing the other day. And then that inspired me. Let’s see what happens when you paint with India Ink for a change! 🎨