It’s always fun to create other stuff using leftovers and scrap paper from previous artwork!  In my last blog post I wrote about making something out of Hello Kitty shapes I had cut out from my Sizzix die cut machine.   Great stuff, but what happens to the scrap paper from which the paper is cut out?  I save it of course to create something else!  No way I’d throw away anything with Hello Kitty on it.

I managed to find a page in my sketchbook where I had previously scribbled some blue paint (most likely Dylusion’s paint in London Blue).  Taking some acrylic inks in fluorescent green and yellow,  I dabbed some using my fingers and brush.  The colour combination looks great so far!

I continued adding more layers.  First I began adding more scribbles and doodles with some oil pastels in light and darker blue.  Layers of inks in just yellow and green were then added on top including more fluorescent colours and also introducing Ecoline inks for their transparent effect.  Added also were some rubber stamp flower imprints using Distress Ink and Distress Oxide.

A Bit of Negative Space

Go recap, I used my Sizzix die cut machine to create the shapes of Hello Kitty faces.  The faces were then used for another artwork but I did not want to throw away the scraps, especially where the Hello Kitty was still visible.  As such, I thought it would be cool to cut around the areas and glue them onto the background, hence creating a negative space effect.  I further managed to salvage a “practice cut out” of Hello Kitty when I was trying out the Sizzix machine with some used white paper I wanted to recycle.  Instead of throwing that away, I used that in this piece!  The painting was then finished off by adding the eyes and nose on the “negative space” Kitties.  Now look at it! 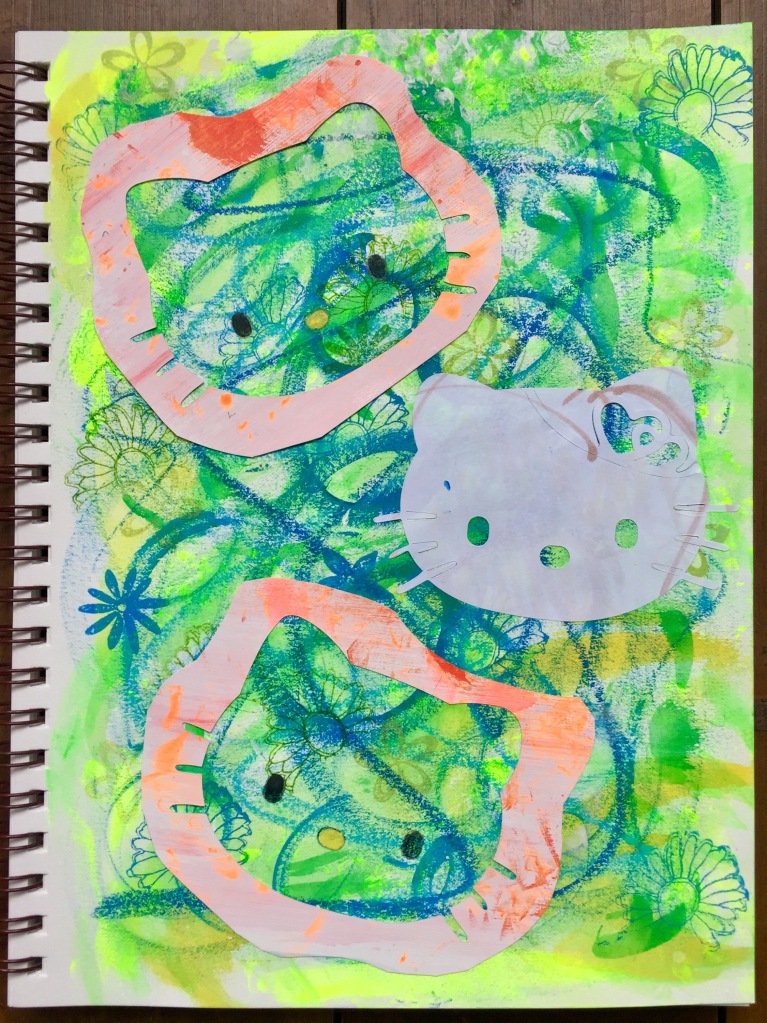 I haven’t used my Sizzix die cut machine in a while and hardly been using it but I ought to more often!  It’s like craft punch but larger.  Not only would I use it for collage work but I’d like to work more with negative space and even using the shapes as stencils!  I’m also happy with the painting.  It has that autumnal feel to it with the green and orange/red but because of their vividness, it is very uplifting.  That’s something we will surely need as the season develops and days get colder and darker!