I started preparing this piece about a month ago and completed it some weeks later.  Having my experience at the Ayako Rokkaku exhibition fresh in my mind, I was again inspired by this amazing Japanese artist and ventured into creating another piece for fun.  First thing I thought of when finishing it was Little One wandering into a room of funky lights with bursts of colour!  She is at first a bit taken back with the brightness but grows to enjoy it.  Now she loves being surrounded by vivid colours as it lightens up her day!

Like Rokkaku, the painting is more intuitive and was totally unplanned.  Here I started with using up pools of the India Ink I had been using for another project by just doodling away.  Then I began adding more doodles with oil pastels and then topping it all with some yellow fluid acrylic paint and spraying on some Dylusions ink in Lemon Zest and Vanilla Custard. 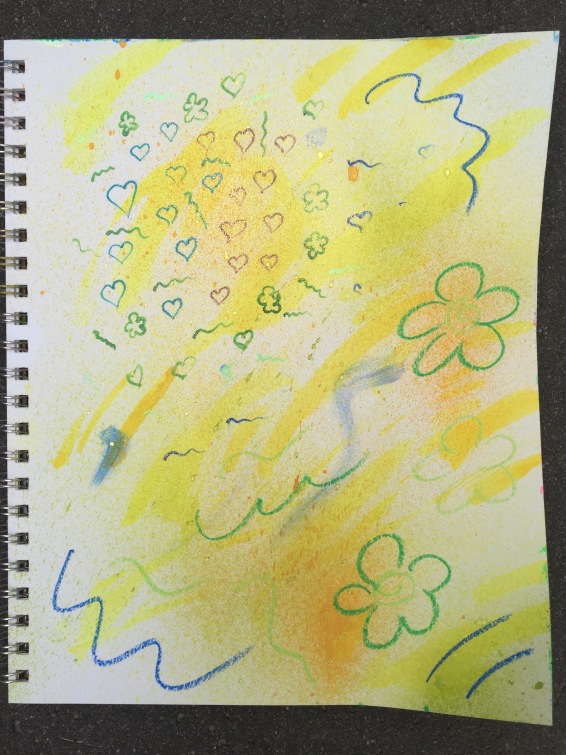 This is when the “Rokkaku inspiration” comes in as I began introducing various colours on top.  It was a random mix of acrylic inks and heavy bodied acrylics to experiment with the different thicknesses.  Although Rokkaku spreads her paints with her fingers, I also used a palette knife and splattered ink directly from the bottle droppers.  I think it took some time until I was happy and ready to pursue the next step.

It took a few days to decide what I wanted to do with this painting.  Though I was happy with it as a background, what to draw on it?  I was keen on including Little One but how?  Then I came up with the idea of positioning her not quite in the centre but just a bit on the right, under the India Ink doodles of hearts and flowers.  Something different from the usual.  I started painting her hair and face using Jane Davenport’s paints which are quite opaque.  As the background colours were quite strong, though, I spread some modelling paste on her hair and dress  This also gives texture to Little One and makes her pop out from the background! 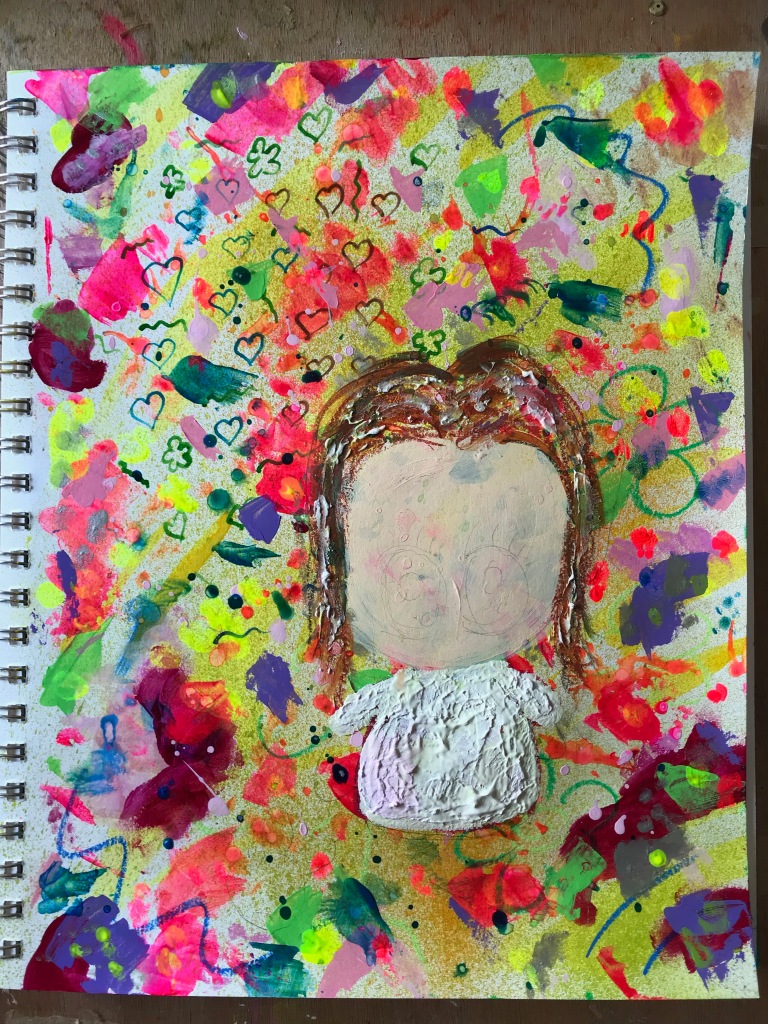 After letting the modelling paste dry, I added more brown on the top in her hair.  The dress was baby pink, and I drew in the details with acrylic markers.  Eyes were also painted in brown markers.  To make the whites of the eyes show, I brushed in some white gesso and then painted white on top.  I decided to add two little bunny heads to give more dimension to the painting.  Otherwise, it would look a bit too lonely. I simply brushed in some white gesso, then painted over it before outlining and drawing eyes in pink acrylic markers.  Now I think we’re done here!

Once again, an intuitive painting that turned out colourful and kawaii!  I enjoy making up as I go along and experimenting with the different colours.  Now that the warm summer is coming to an end, it’s a good chance to work with bright colours while the season lasts.  And Little One agrees as she exits the room of vivid funky lights.  Let’s make the most of it!

💐 EARLY BLOOM. Spring is soon to come! Well, it seems as if it came a bit earlier than expected. After a week of snow a couple of weeks ago, temperatures suddenly soared to about 15℃ feeling like Spring 🌸. And when I was going for my morning jog the other day, I spotted a few flowers springing up already! I then decided to create some digital painting here with an abstract twist. Great practice! 💕
💖 IT'S WARMING UP! Today I’m sharing with you a colored pencil sketch. And why call it "It’s Warming Up”? Well temperatures here in the Netherlands have suddenly soared from being a snowy frozen two weeks ago to an almost Spring-like 16°C ☀️ And now Little One is getting her Spring clothes out preparing for the warmer months ahead because coming Monday will be March already! And another is that my color pencil sketching has gotten quite rusty as it's been a while and hence this drawing is a warm up to ease myself back into them. Must say it was fun and didn't turn out badly. Little One in fact looks so adorable and kawaii! 💕
🐈‍⬛ THREE LITTLE KITTENS. Over the years, I’ve come across quite a few little cats roaming in the neighborhood! Most likely they belong to neighbours and are let out so they can wander around freely. I’ve familiarized myself with a few of them because they are so adorable! There is naughty Ginger then Bram the grey cat that belongs to the lawyer downstairs in my old apartment and a random black one occasionally spotted by the local supermarket. And I thought this would be a perfect opportunity to practice some digital painting! 🐈
💙 CELEBRATING WITH CHAGALL. Sharing a painting I made whilst following Lesson 3 Chapter 4 of Tracy Verdugo’s Story Painting Class! We made a Chagall-inspired piece with the theme “The Art of Celebration”. 🎊 Whilst adapting his style, we were to choose a happy celebratory moment in our life. I of course had a few but the most recent that comes to mind is when my boyfriend and I decided to move in together and buy our dream house last summer! 💛
🐶 DOGGY WALKING DURING CURFEW. The curfew in the Netherlands is still continuing till 3 March. But those exempt include those walking own dogs! Of course dogs need to be walked a few times a day even at odd hours so perfectly makes sense. And so Little One enjoys walking her neighbour’s doggy! Her neighbour is a health worker and when she has the evening shift, Little One is happy to help out 🐩. As she walks, she occasionally comes across Ginger the naughty neighbourhood cat lurking in the corner. How cute is that! And now a little painting about it... 🐈
💕 Following Lesson 2 of Juliette Crane's Serendipity I classes now! Just finished this morning creating my "collage paper" which I will be tearing up and using for my main painting. But it's too cute to tear up... 😞