Today, I had the honour of meeting Ayako Rokkaku, a talented Japanese artist based in Berlin. I first came across her work by some brochures that were lying around at the Japanese Go Center in Amstelveen, the venue where I do my Friday afternoon art classes.  She has an exhibition at the Jan van der Togt Museum in Amstelveen until the last week of August, and I was immediately interested.  “Her work is so kawaii”, I thought to myself.  I so have to check them out!

What attracted me to her work is that our approach is a bit similar.  She uses a lot of bright vibrant colours, combining abstract with some manga-type characters.  Really cute creatures with her main feature being a little girl.  Typically huge eyes and expressive mouth along with long limbs and big hands.  Round and kawaii.  So random.  A bit like my Little One, but in a different style.  I really had to see more!  So this week it would be.  It was by pure luck that I discovered she was doing a live painting session at the Jan van der Togt museum this Saturday!  So an exhibition, demonstration and even possibly meeting Ayako-san in person all rolled into one.  What an opportunity not to be missed!

With the museum open at 11am and her demonstration starting at 12 noon, I thought I would firstly check her exhibition out first to absorb her work and grasp a better understanding of them before seeing her paint.  And wow!!  The unique thing about her is that she paints with her bare hands and fingers. Apparently, she only uses a paintbrush to sign her work.  She is not afraid to get her hands dirty and happy to dip into a pot of paint and get messy, somewhat getting in touch with her inner child.  When she paints, she is quite delicate and rather than briskly splash the paint around, she spreads them so gently in slower motions and even methodically although she makes it all up as she goes along. 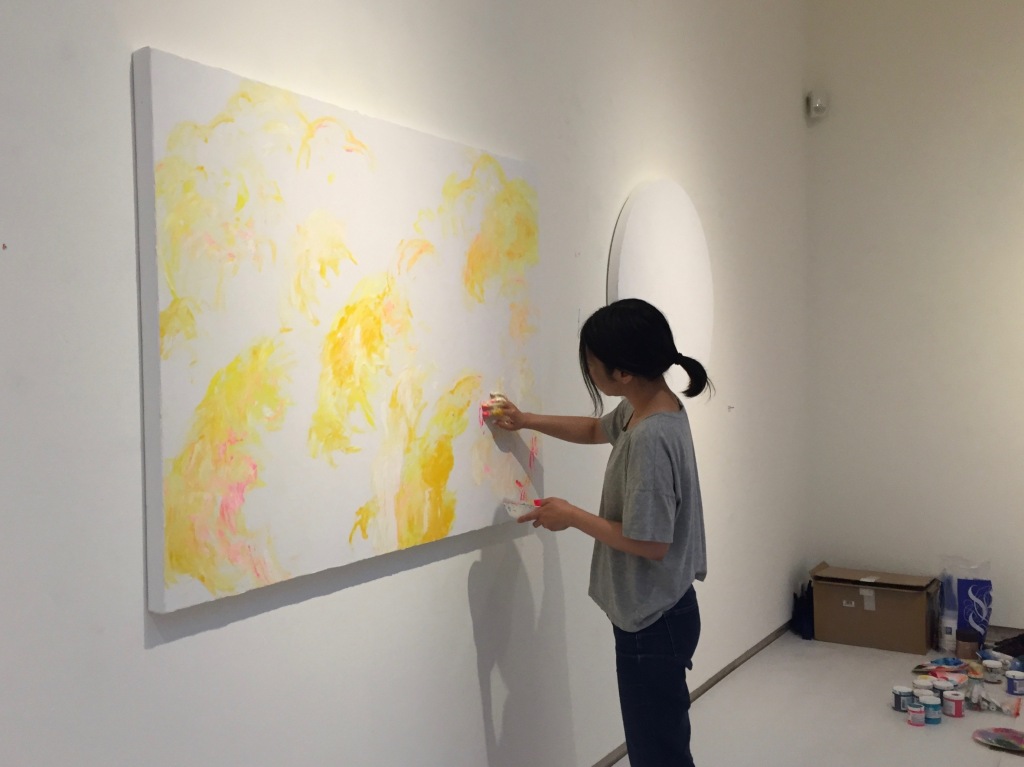 As such, Ayako-san goes for the intuitive approach in her work.  When asked during her demonstration what she plans to paint, Ayako-san replied she goes where her mind takes her.  Rather than finish one painting and moving onto the next, she typically has 3-4 projects going on at the same time and goes back and forth to them when it suits her.  As a result, a painting would take a week to complete if she’s happy with it.  She sure has not only talent but a very creative flow and powerful drive, and it shows in her work.  Then by randomly adding her little girls and a few cute anime-type characters, she gets to soften the mood, thereby appealing to children as well as adults who are also attracted to combination of those vibrant colours.  A lot of positive vibes!

I love how she uses different canvas sizes and shapes too.  Some are huge.  And even round, which she orders from the U.S.  Before moving onto canvas, Ayako-san actually started from painting on cardboard out of old boxes which I thought was very clever.  Something I ought to do as well, given the amount of cardboard boxes I accumulate from all my internet shopping! As a matter of fact, Ayako-san never went to art school.  Self-taught and naturally talented, she began as a “street artist” in Tokyo at age 19 or so painting in parks because she preferred doing so outside.  Then she was discovered.  In 2003 and 2006 , she won awards at the Geisai art fair in Tokyo organised by the internationally renowned artist Takashi Murakami.  Check out her cardboard paintings below!

And then shortly after, she was spotted by a Dutch gallery owner, Nico Delaive who brought her to the Netherlands from where she blossomed.  The rest is history and now she resides mainly in Berlin, Germany doing exhibitions in Japan and the Netherlands.  What I found amazing about Ayako-san is her continuing creativity.  Drawing and painting on anything!  Cardboard boxes.  And even old paint jars!

The most amusing I thought was her paintings on old Louis Vuitton handbags.  Many may wonder whether a collaboration would be an idea.  But then again, I don’t think she’s the type.  I had the chance to chat with her, and let me tell you, clad in an old t-shirt and jeans and barefoot, she’s one of the nicest people you meet!  Very down to earth and you can tell she’s doing this all for art and not for the money.  You clearly notice she has a lot of fun with her artwork and considers herself lucky she is recognised for her talents and earns respect.  This made me cynically think perhaps her artwork on the Louis Vuitton bags may be her way of rebelling against the excessive? 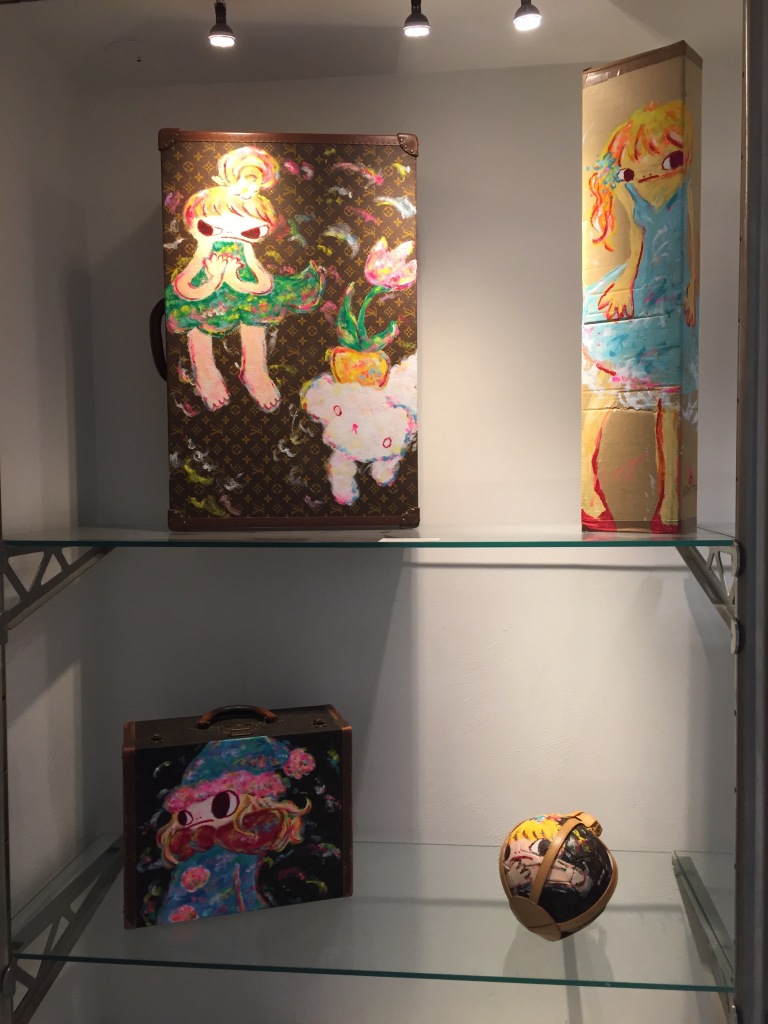 I was pleasantly surprised to see other forms of her artwork too like stuffed animals (or little critters) and even some sculpturing.  It’s not clear to me if she actually sewed and made the stuffed animals herself, but she definitely does a few sculptures although painting is her mainstay.  Those little critters are so cute though!  Makes me want to take some of my unwanted clothes, start learning to sew a bit and create some kawaii things.  I just admire how much effort Ayako-san put into making her presentation so cute and welcoming.

I am very happy to have met and chatted with Ayako Rokkaku.  Added bonus was that we also got to speak in Japanese together which was great as we shared our experiences as unmarried Japanese women living in Europe.  Not only do I admire her work, but I find her a very pleasant character.  I am sure she will do well here as her work is amazing, a unique combination of intuitive, abstract and kawaii.  Wishing her all the success and hoping the success will not change her.  Gambatte kudasai!