It’s the beginning of April, and last Saturday we switched our clocks forward to summer time.  So excited!  This means the days are even longer.  We should also be looking forward to warmer temperatures and flowers blooming!  In Holland it’s been quite erratic in terms of temperatures.  The other day it was 17 degrees centigrade and then plummeted to 10 degrees.  So hurry up, Spring, what are you waiting for?  We want to see the flowers blooming already!  And so as my wishful thinking, I decided to paint some colourful flowers.  And this time, it will be pure classic acrylic painting.

The paper I used was Cansons 300mg on which I primed with white Gesso before applying any colour.  That day, I was in the mood for some brilliant strong colours so went for some acrylic ink (by Daler Rowney or Amsterdam) and fluid acrylic (by Golden).  A combination of various blues for the sky and greens for the ground, randomly applied with droppers and spread around with a palette knife rather than a brush for that blotchy effect.

I outlined the flowers with acrylic markers (Amsterdam Acrylic and Molotow) according to the colours I wanted them to be.  Made them big and simple, nothing elaborate.  Before filling them in with paint, I thought it would be cool to add some texture to the flowers and thus I applied some modelling paste (Winsor & Newton) in the desired areas such as the petals and on the tulips.  I also came across some Glass Beads (Liquitex) in my drawer and had an idea to apply them in the centre of the flowers for that studded effect. 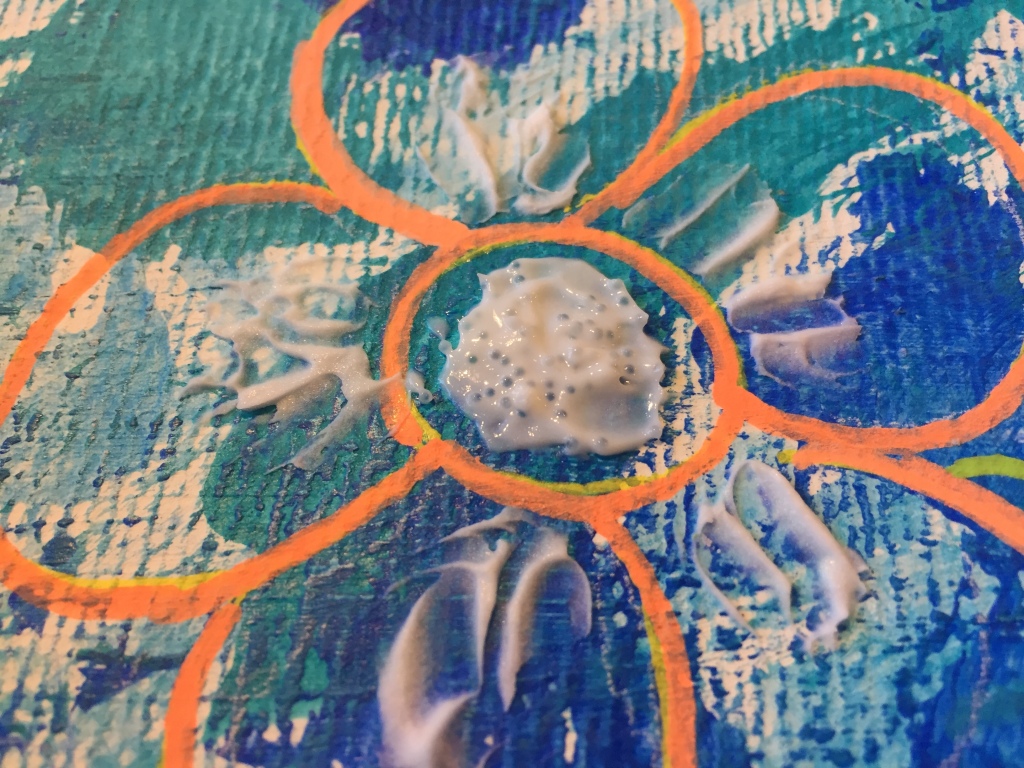 I used pots of acrylic paints by Dylusions because I love their bright colours!  Instead of purple as originally planned, I made the middle flower light pink to contrast with the blue and green background and to neutralise the warm colours of the red tulips and the orange and yellow flowers on each side.  And rather than make both the left and right flowers orange, I made one of them yellow and orange in the centre and the other way around for the other.  I thought that would add some variety without making the drawing look chaotic.  It worked rather well!  The stems and leaves were drawn in with acrylic markers.  Quite a simple painting but then again less is more!  Am happy with it.

So much fun going back to painting in just acrylic again.  It’s amazing the variations you get with acrylic as it’s not just paint but also ink, fluid and markers.  Then you have the mediums in which you can add in the painting to thicken or add texture such as modelling pastes and glass beads.  It makes being creative all the more interesting.  And now that the warmer months are arriving, it’s time to get out the bright brilliant colours and enjoy the energy!