Little One is off to a Teddy Bear party!  The theme is Christmas of course.  It’s like a Teddy Bear Picnic but as it’s winter, it’s all inside where it’s warm and cozy.  Today, she’s wearing her cute little red frock for this occasion.  A sweet wooly one just like her Teddy Bear.  They are so looking forward to it and meeting up with friends and other kawaii Teddies.  And of course I had to paint about it!

Normally we start with the background when painting but this time let’s start with the face.  Why?  This is from some leftover paint I had from a previous artwork, the excess of which I brushed on this sketchpad (Strathmore’s Visual Journal)!  Following that, I rolled on some Distress Oxide ink with a brayer around the face to create a basis for my background 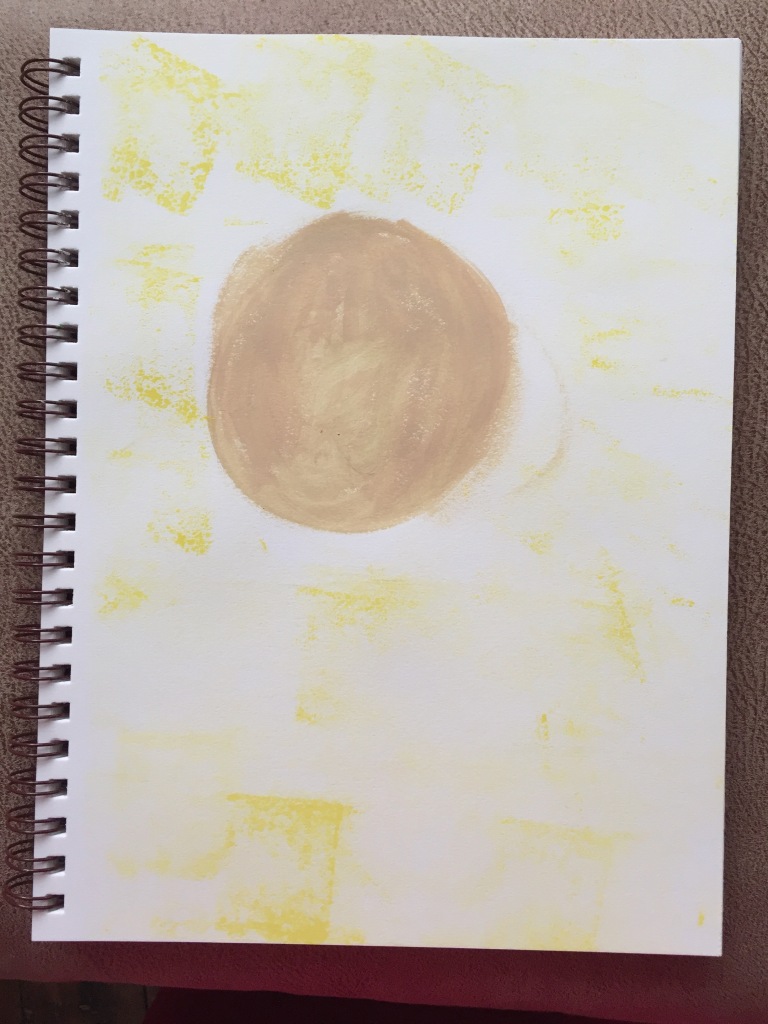 I continued working on the background making bubble-wrap imprints using some Fluid Acrylic by Golden in both light gold and deep gold.  Little One and Teddy were then roughly outlined in using some oil pastel and graphite pencil.  Cute! 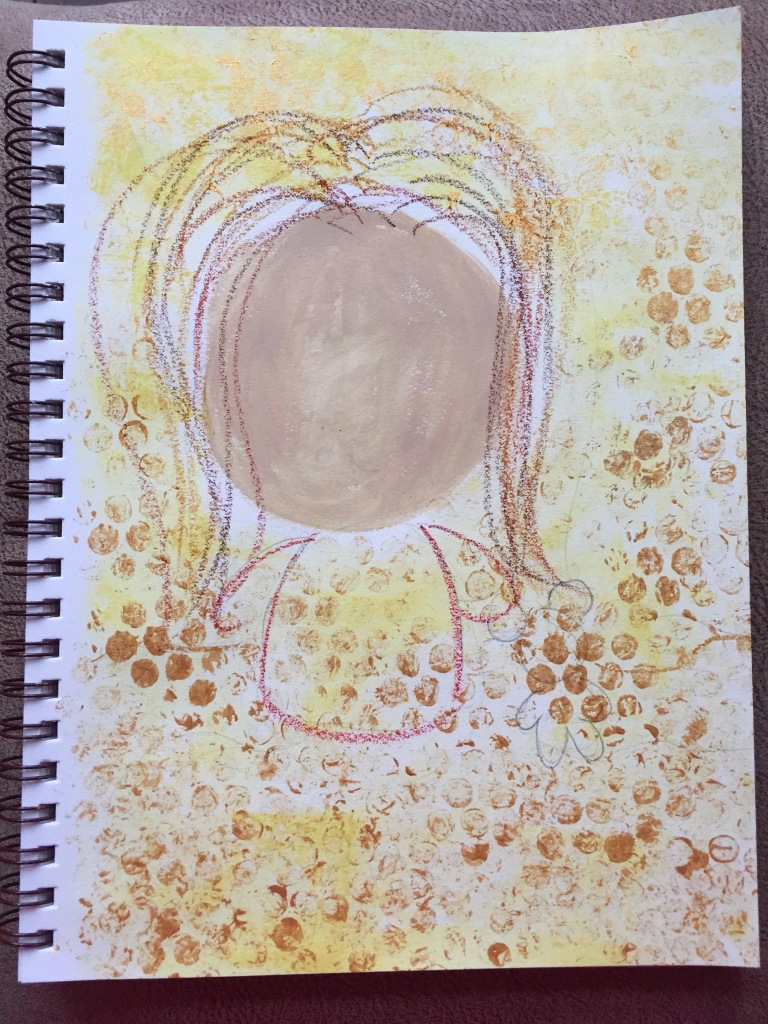 I wanted to make the background more exciting and decided to brushed on some Metallic White by ARA on the bottom third of the page.  Whilst waiting for it to dry, I thought to play around with some textures!  Some modelling paste (Winsor & Newton) was applied on Little One’s hair with a palette knife, followed by some Coarse Molding Paste (Golden) on her frock.  Finally some Glass Beads (Liquitex) was carefully tapped on Teddy Bear.  Let’s see what happens!

The Metallic White layer on the bottom third of the paper became dry by then.  With a stencil, I then tapped in some blue dots on top for some “snowy” effect. Something was still missing though.  Adding some violet may give some unity to the background and hence I made some more bubble wrap imprints this time using Dylusions paint in Laidback Lilac.  Now we’re talking! 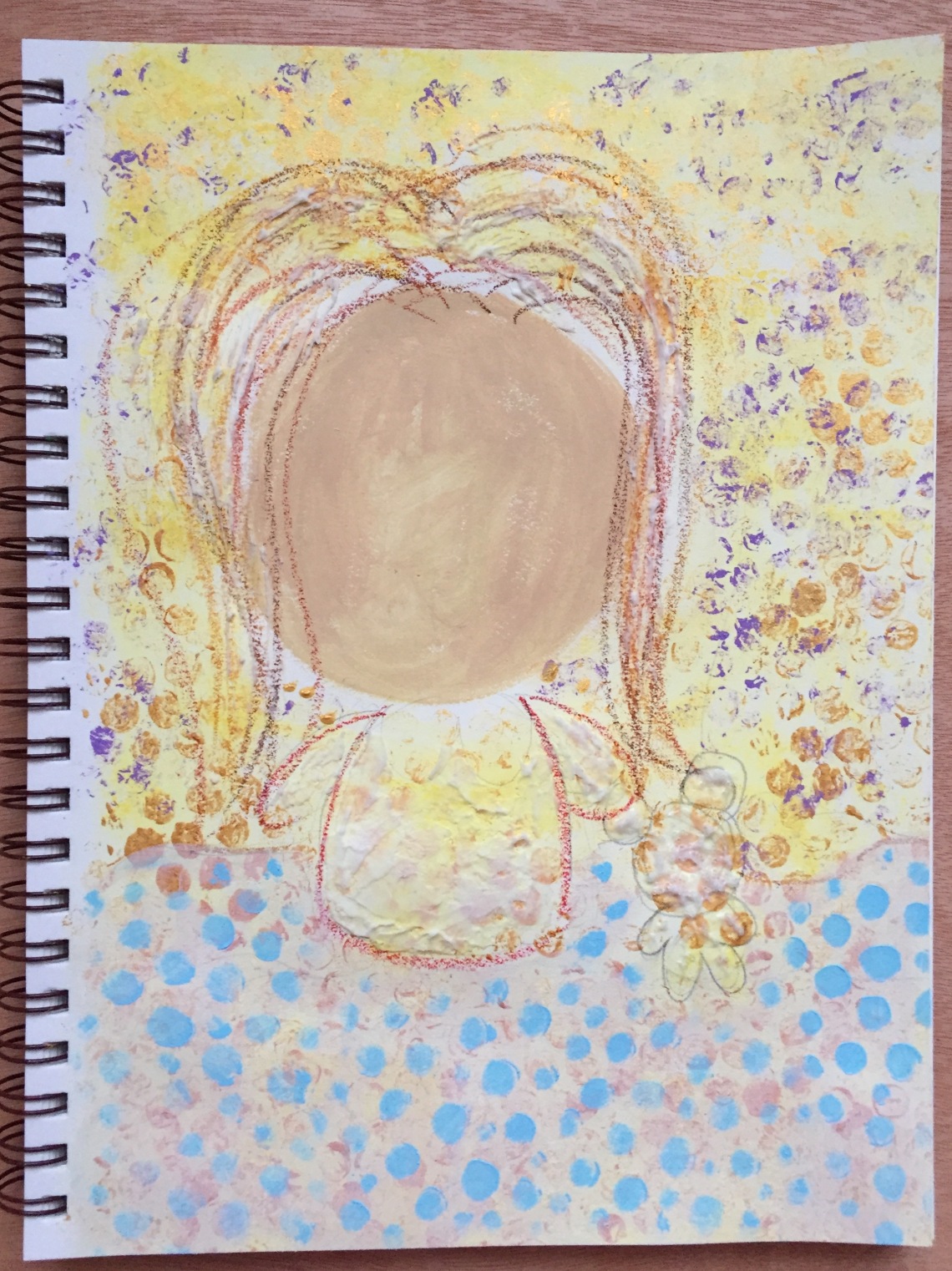 Let’s Colour them In!

I started with the dress.  Mixed some primary red with some fluorescent red (both by Sennelier) and combining that with some gloss medium, I began painting.  The excess paint was used partially for the hair.  In fact, for the hair, I also mixed some green (Iridescent Jade by Old Holland) as well as some brown shades like raw umber and burnt sienna.  By adding some red and green, I was able to add some interesting dimensions to the hair, particularly to enhance the Christmas theme! 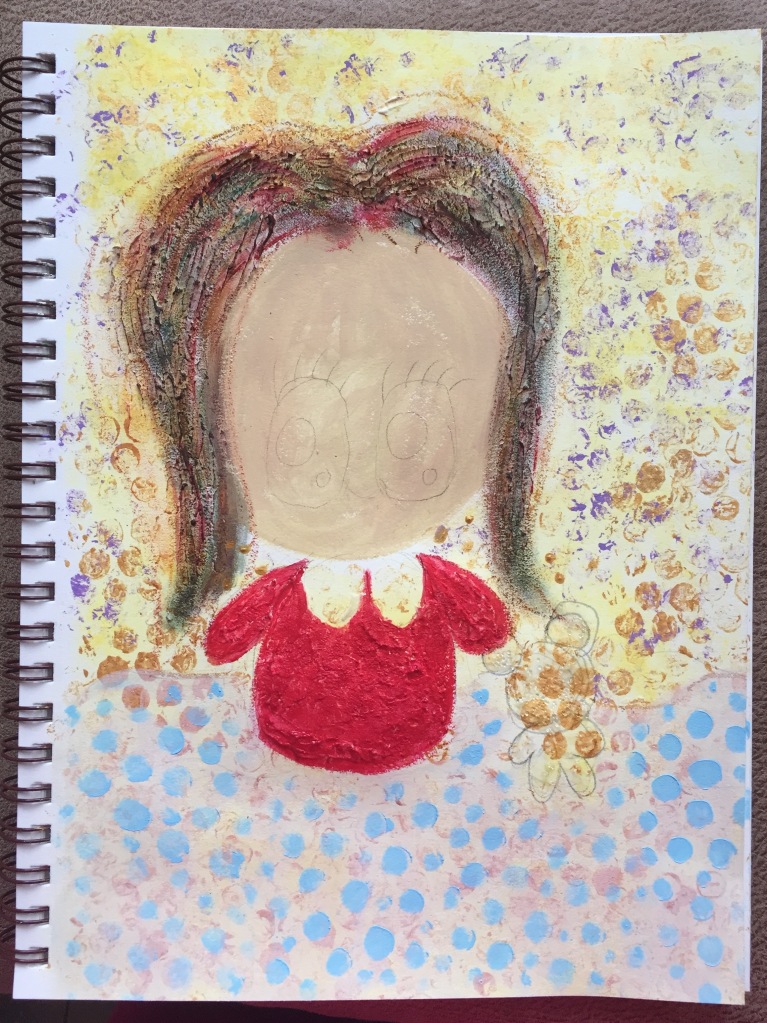 Getting in the Festive Mood

This Christmas theme continued with the eyes as well.  First I lined the eyes and lashes with some brown Molotow acrylic markers.  I then combined some of the red with Iridescent Jade green to create a shimmery shade of greenish-brown to colour in the eyes.  The whites of the eyes were painted in with the Metallic White.  That same metallic white I also used for the collar of Little One’s dress.  For Teddy, I merely combined some orange with fluorescent orange and tapped the paint in making sure I covered the bits between the glass beads.  As finishing touches, I dotted in some gold glitter glue on the lashes.  A failed attempt at doing the same on the collar with the pearly Nuvo Drops led me to simply spread it out on the are but hey, it still looks cool!  Here it all is now… 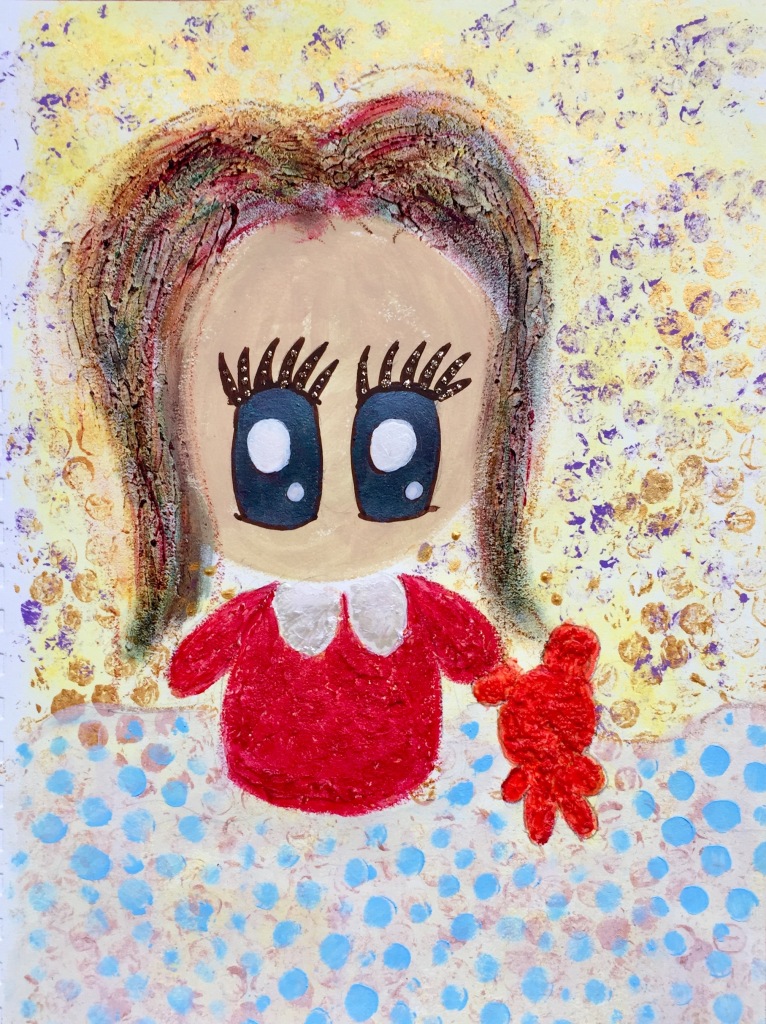 Wow I had so much fun doing this piece.  More experimenting!  Firstly I had a go with adding texture to my painting with various acrylic pastes.  Then combining colours and trying newly purchased paints was an adventure.  Mixing green and red to make brown also as a means to enhance the Christmas theme was a brilliant idea!  I am very happy with this piece of course and love how the colours pop out.  And now see how Little One is all excited for the Teddy Bear Christmas Party!