This painting began at our Tuesday evening abstract art classes back in mid-October.  Although the theme was “flowers”, we of course had to create it in an abstract way.  Not to worry.  I’ve been painting loads of flowers before so not a difficult task.  This time though, I went for canvas rather than paper.  And a relatively large one and square-shaped.  Something different.

I designed my piece with graphite pencil, going for huge flowers.  Although it was mid-October already, I wanted to make it all lively and colourful.  I was looking forward to our trip to Italy then, a country of vibrant colours.  Of course my mind was over there!  I worked with the background first, mixing some light green acrylic ink with some dark paint and swishing them around with my fingers and where needed like the edges, with a soft brush.  Then I spread some modelling paste in some areas of the flowers with a palette knife to give them some texture.  Whilst waiting for it to dry, I began painting petals in Lemon Yellow. 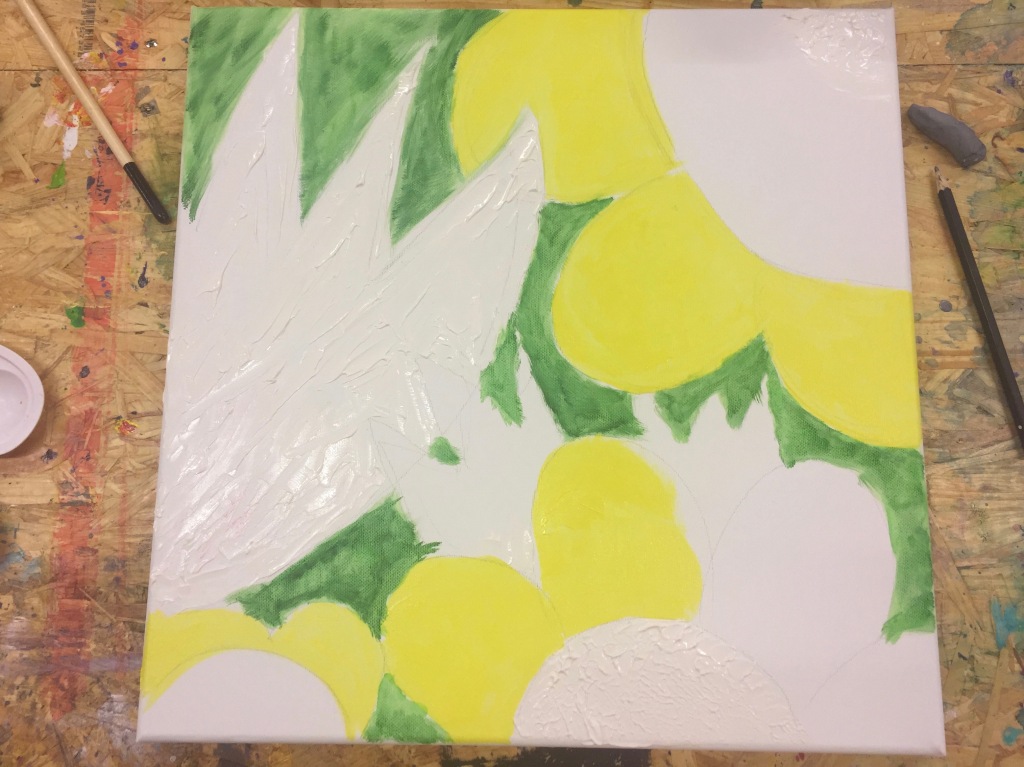 I painted the two smaller tulips red first.  For the larger one, I blended some of the red with some iridescent Metallic White paint by ARA but never got around to completing colouring it in.  The violet bits is a mixture of some Ultramarine Violet and Fluorescent Blue.  There too, I also didn’t complete it and left it at that till the next class.  Unfortunately, this was not going to happen as the following few weeks, I was off on holidays and when back we would be starting a new project.  I then decided to bring it home and work on it… 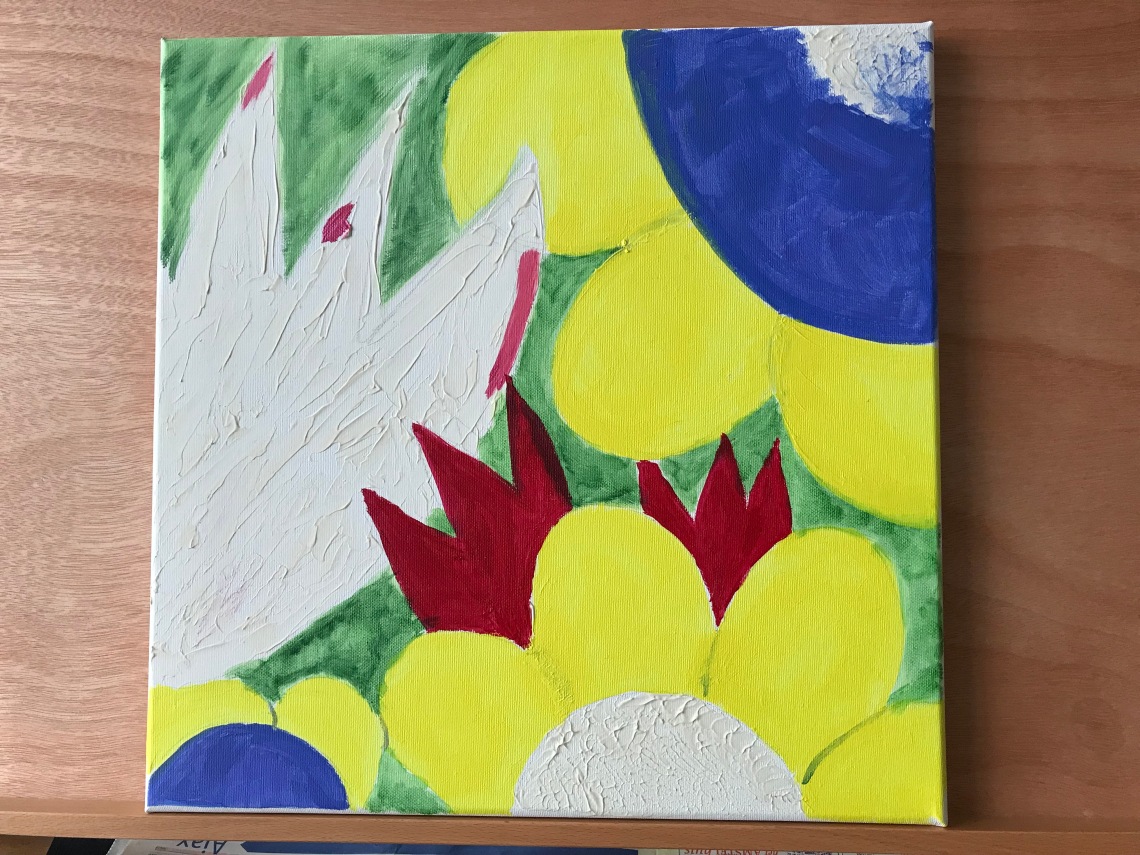 Of course when I brought my painting home, I didn’t have the same paints I used with me!  This meant I had to improvise with what I had and make some changes.  At least I had the Lemon Yellow and Metallic White paints though.  Not having the Ultramarine Violet at hand, I decided to leave the existing violet/blue but for the blank areas, go for another violet shade altogether.  I mixed some purple with titanium white (by Amsterdam Acrylics) which is the inner part of the flowers on the top right corner and bottom right.  In addition, I hadn’t the same red paint I had used for the tulips.  The two smaller ones were left as they were, but the larger tulip had to be completely changed.  Now a chance to introduce my favourite colour, pink!  I blended some Process Magenta (Dalers and Rowney) with White Metalic to stay consistent with the existing iridescent scheme.  Now we’re talking!  By the way, all the paints were mixed with Acrylic Medium so the colours can spread further on such large surfaces.

I was very happy with the colour scheme and design.  That said, I felt that the painting could have a bit more.  This is when those Sennelier 3D Acrylic Pens come handy.  I firstly doodled in some random stuff on the blue-violet area with those pens in light blue and dark blue.  And those two red tulips are indeed pretty but why not do something fun with them?  I mixed some Liquitex Glass Beads with Sennelier Fluorescent Red and with a very narrow palette knife, carefully spread it on the red.  Then tapped it a bit to lift some of the mixture off for a rougher look.  Finally, I wanted to enhance the texture from the modelling paste on the light violet bit.  Grabbed some iridescent purple acrylic ink (Daler & Rowney) and gently dispersed some on the rough areas with my finger.  Now you can see the texture better.  Iridescent or pearly finishes helps enhance the rough surfaces as seen also on the pink tulip.  After some tidying up of the edges, I can now say I am very happy with this painting!

It’s not often that I get to work with canvas, let alone large ones.  I find it very pleasant.  Firstly is the freedom of more space, if using a large one, although more paint is needed.  Canvas has no risk of getting warped or curled up on the edges unlike paper.  And of course, it is strong so you can add as many layers as you wish and add various embellishments.  The only drawback of course is that for storage, canvas can take up a lot of room.  Nevertheless, no harm painting on one once in a while for fun.  I certainly had a lot of fun with this one and look forward to the next opportunity, especially to paint something as vibrant and lively as this!  I would go for flowers like this any day, especially in this dark dreary winter months.

🐈 GOOD KITTY, BAD KITTY. Just completed the last lesson of Unit 2 of Tracy Verdugo’s “Abstract Mojo” the other day. This Lesson is called Good Jaguar, Bad Jaguar in that we create an abstract painting with something familiar from our personal surroundings. Whilst Tracy chose a hand carved Guatemalan jaguar, I went for a kitty inspired by my collection of Hello Kitty but without the customary ribbon! 🐈‍⬛
❤️ GONNA MISS HIM. BF is off next Tuesday for about a week photographing for his work plus some skiing! I on the other hand am staying put because there is quite a lot of work to do in the house and I’m not too keen about snow. He will be missed! And here comes a kawaii painting I made for us to make me feel better: a sumie ink drawing combined with watercolors! 💕
🐱 WHEN PIGGY TURNED KITTY. Another feline character! This time though, the painting was originally intended to be a pig, believe it or not. It didn’t work out as planned unfortunately as I ended up not liking the look of what I had painted and changed it into a cat! 💕
🌙 EVENING GLOW. Little One is back again! Sharing with you another fun mixed media painting I made whilst following another of Juliette Crane’s fun painting class. This time, I created a night theme in which Little One is in her garden enjoying the full moon! How sweet is that 💖
🐈‍⬛ BLACK CAT ON BLACK. Inspired by another art student's painting, I made my own version. Negative space was created on black paper to end up with a black cat! Colored charcoal by Cretacolor worked so well for this. Isn't my little black kitty so adorable? 🖤
🍰 CAKES AND ALE. Following Tracy Verdugo’s “Abstract Mojo” classes again. This time the theme is Archetypal Symbols in which we research and incorporate symbols in our artwork. Of the six mini paintings, this is the final one! I just thought the symbol of "cakes and ale" was cute then got curious as to the meaning of the phrase. Originating from William Shakespeare in his play Twelfth Night: “Dost thou think, because thou art virtuous, there shall be no more cakes and ale?” it implies pleasure and enjoyment of the good life. Well there you go! 🍺