A quick charcoal and soft pastel sketch I made before leaving on my holidays!   Quite an omen, too, because whilst on holidays, a friend from school saw my post on Facebook, and as it turned out, she found out she and her husband were going to travel in the same area for a few days.  And then we met up.  They reside in Austria.  Two years ago I went to her birthday party, and that was the first time I saw her for over 30 years!  It was an honour that she asked what we were up to and if we had the chance to meet up again.  The four of us had such a great time for the two days we got together.  It is not often that I get to spend quality time with real friends.

Then when I was back home, I found these drawings of Little One and her friend.  Very appropriate for that occasion!  Initially, this drawing was actually spontaneous at the time.  I wanted to try out my new charcoal sticks and combine that with my Faber Castell’s soft pastels which I had recently bought and used a few times with satisfaction.  The willow charcoal sticks by Sennelier were recommended by my Tuesday evening art class tutor, and he was right, they are wonderful!.   As for the soft pastels, I really love the Faber Castell set which I find tons better than the Royal Talens ones I had been using.  Both of these new products are considered professional standards, and I must say there is a reason for that.  First, I tried it on Canson’s Mixed Media Paper but was not sure about the results, and then I proceeded with Royal Talens Van Gogh paper to see what would happen. 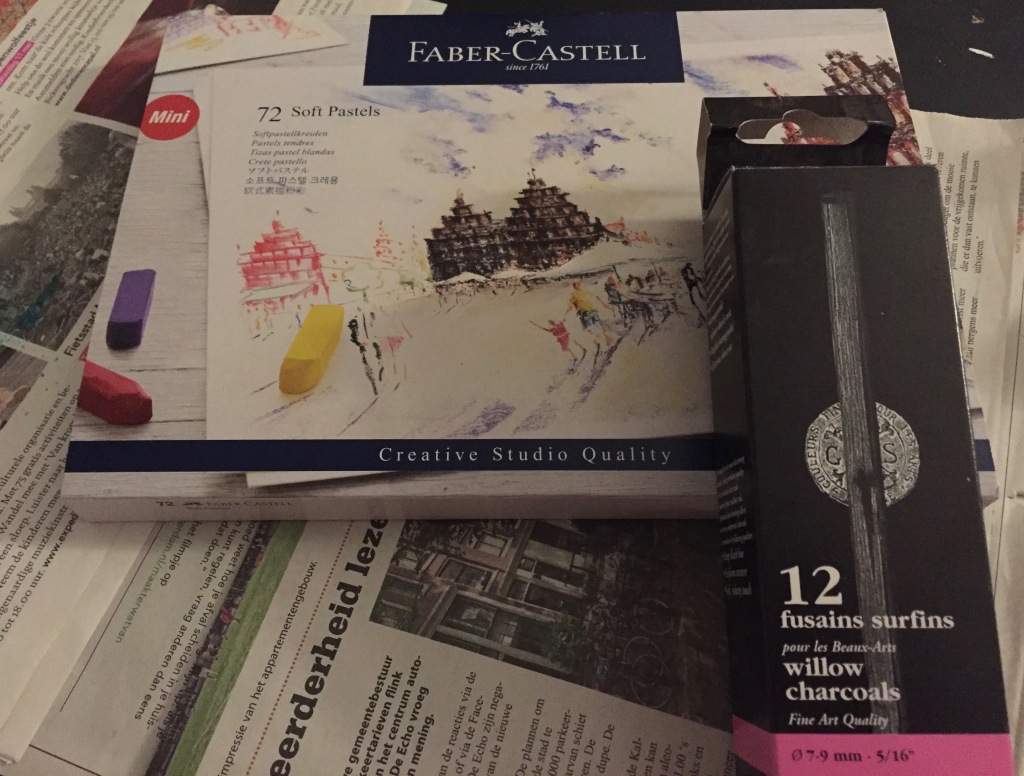 This paper is 300 gsm. As you can see closely, the texture of the paper is quite rough with stripy bumps.  Some artists like this because it helps the powdery charcoal and pastels to adhere on the surface than if the paper were smooth.  Personally, it took some time for the stripy texture to grow on me.  It’s not that bad, but I do prefer the softer and smoother look.  Perhaps I would use it more for a rough sketch rather than colouring it completely.  Canson’s paper, as I conclude, is more suited for mixed media work and acrylic painting. 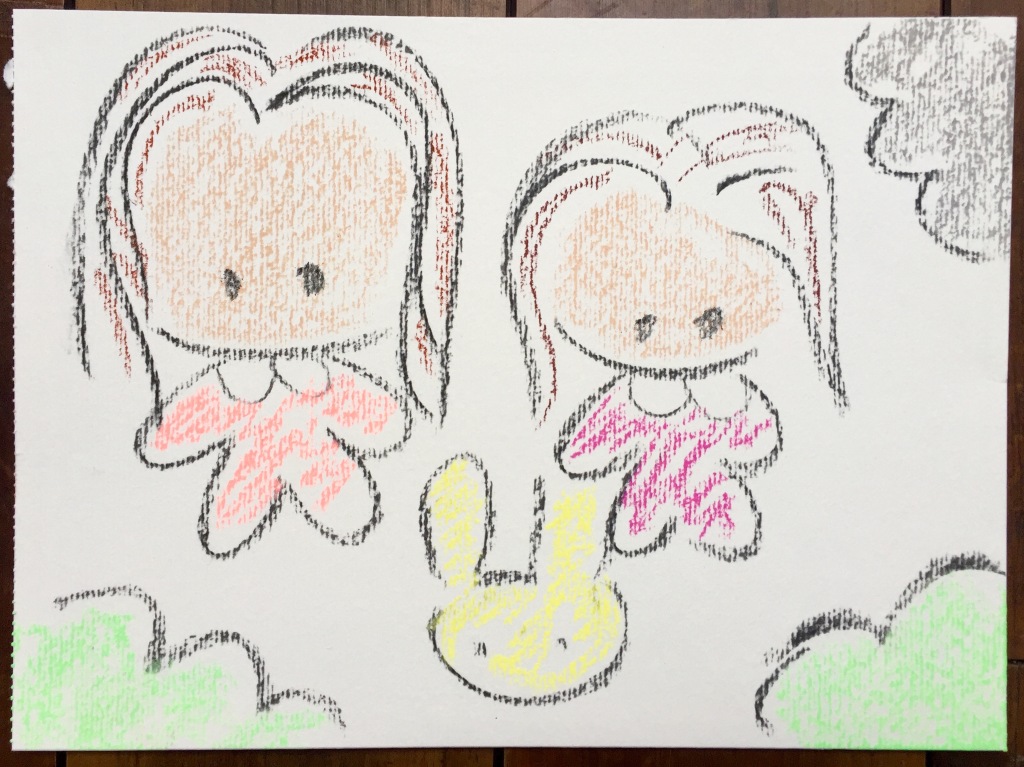 This paper is also 300 gsm thick.  However, the surface is smoother though not velour smooth.  There is some texture to enable the charcoal and pastels to adhere to the paper but the surface is not as rough as the Canson paper.  As a result, I found it easier to draw on it and needed not worry that the charcoal and pastels get used up quickly.  You can see in the below photo that the result is a fuller and more velvety finish.  I would definitely say hands up for the Royal Talens paper.  I sprayed both drawings with Sennelier Universal Fixative.

I do enjoy the occasional soft pastel drawing, especially when combined with black charcoal.  The vivid colours do pop out.  And I of course love drawing cute things like this!  It is also not often that I get to draw Little One hanging around with a friend or two.  She also likes to go out and enjoy spending time with her friends, and it is so wonderful to draw about it!

💐 NEW BEGINNING. I’m back now! It’s been a crazy past few weeks as I am still trying to sell my old apartment. Decided to switch realtors just as I have been completing the classes on digital air-brushing. These lessons typically begin with drawing flowers but this time, I left them as buds instead of adding any petals. It is as if we are waiting for the flowers to bloom, a perfect symbolism for my present situation with my apartment: Striving for a new beginning! Now I shall keep hoping and pray that all will go well 🙏
👑 ZOOMING: QUEEN KUMA. From my "Kawaii Zooming" painting emerge some mini paintings each depicting these happy friends getting together on Zoom! And who have we here… Queen Kuma! That’s right, the queen of all teddy bears. Apparently, Kuma means “bear” in Japanese. Kuma loves making her own costumes and dressing up with her friends, and today she's dressed like royalty. Check out her fancy gold tiara designed by her friend Little One who has crowned her as queen of all teddy bears, how sweet is that! 🧸
👀 I'm back! Just been a hectic 10 days emptying out my old apartment with no time at all to paint. Glad now to be able to resume to everyday life and getting creative again! Here a kawaii drawing I started on black paper whilst checking out Ranger's China Markers bought recently. So far so cute! 👀
💗 ZOOMING: LITTLE LICA. From my "Kawaii Zooming" painting emerge some mini paintings each depicting these happy friends getting together on Zoom! Meet Little Lica-chan. Named after the Japanese version of Barbie Doll, she’s a great laugh and a bubbly drinking buddy of Little One. Although Little One is a teetotaller, Little Lica enjoys the occasional tipple now and again. Cheers!🥂
❤️ HELLO KITTY FRENZY. Yes that’s right, Little One is indeed a huge fan of Hello Kitty. And today, she wants to show you her little Hello Kitty outfit she made for us! What fun she is having, posing with it on along with all her Kitties in background. So here we go, more digital art! All I did was find a photo I had taken, blur it and paint on top 🎀
❤️ ZOOMING: HELLO KITTY. From my "Kawaii Zooming" painting come some mini paintings each depicting these happy friends getting together on Zoom! Here is Hello Kitty. Well my version of her lol ❤️