Yes another kawaii lovey dovey theme!  And now that this summer is drawing to an end, I’m desperately clinging onto the last of the pretty flower theme too.  Well, those were the few excuses to try out some new Kuretake products I had recently bought:  Zig Cartoonist Black Ink 60 and the Gem Colors (sic) series of Gansai Tambi Japanese watercolour pans, as illustrated below.  (Credit: Gem Colors downloaded from Amazon site) 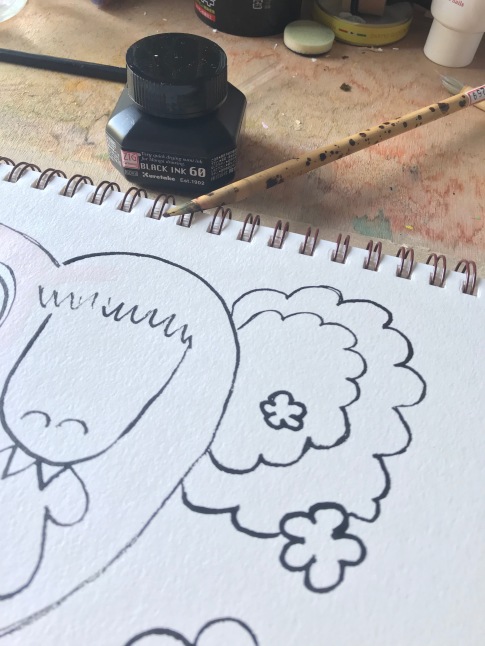 It was my second time for me to paint on my new Strathmore Visual Journal for Watercolors.  The last time I used it, I was very  happy with it and was keen to put my new products to the test on this paper too!  I firstly sketched my drawing with the Zig Cartoonist Black Ink using my Chinese bamboo pen.  As the included word “Cartoonist” suggests, this ink is apparently suited for illustration artists like myself who like anime and manga.  Another thing that makes this ink special is that it is made of sumi which is derived from charcoal soot and animal-based binding properties, typically used in East Asian calligraphy.   Like India Ink, it is also permanent.  Both types of inks are ideal for calligraphy and sketches, but Sumi ink is often preferred as it dries more matte and flat, as opposed to India Ink which has a shiny and “plastic like surface” when dried.  Photo below shows some red paint, since I realised I had forgotten to take a photo of the black ink drawing on its own!

Filling it in with Watercolour

For the colours, I combined the new Gem Color set with the original pans of Kuretake Gansai Tanbi.  Both are from the same brand anyhow, so I thought why not?  The only difference is that the original Gansai Tanbi colours are traditional and solid, whilst the Gem Colors are modern and shimmery.  Nevertheless they work well together.  Unfortunately, the photo doesn’t do much justice with the shimmers.  You can see that the hearts, flowers and our collars were painted in the Gem Color.  The rest was in the traditional colors.  This time, I decided in the end to paint the background a wash of blue rather than leave it white.  This ought to give some life to the painting too!  And I guess I wanted to see how far the paper would not buckle up when getting it all wet.  The fact that it is bound as in a sketchbook certainly helped, but once dried, I did close the book to further flatten it.

This painting was just a trial for my new ink and paints, but I also liked how it turned out in the end.  It’s too cute not to share!  The Zig Cartoonist Black Ink was great, although to be honest, I can just as easily use black felt tip pens for instance by Faber Castell which I’ve been using.  That said, if I want to have a more “calligraphic” effect from a bamboo pen, then this ink is recommended.  The watercolours worked well with this ink, and for a more “Japanese” effect, the Gansai Tambi is great.  Adding some shimmer is also quite a novel idea.  Having a lot of fun experimenting, I would definitely like to go further with it and practice more!