Last night was was my second Tuesday evening class with Dieter.  Focus is on abstract art so a great deal on “painting from the heart rather than the mind”.  There is no right or wrong and you need not be fussed about techniques or precision.  So last night was about learning to apply paint on paper using big sponge rollers instead of a brush.  And what fun it was!

Painting One – Lost in Spring

I went for my usual kawaii bright shades.  Sky blue as background and layer over with some fluorescent pink.  Here we use bags of acrylic ink by Sennelier, and they do come up with beautiful shades.  First layer is rolling on some of the blue paint and then with the second, mixing the pink with some medium to thin it down and produce a glaze over it.  I took the liberty of drawing little clouds and flowers around it with the edge of the roller.  From then on, it’s basically do what you like.  Dieter suggested gluing on some tissue paper which I did but I also took the liberty of adding some torn bits of newspaper.  Glazed some fluorescent green on top and a few drops of bright yellow acrylic ink.  Decided to add a bit of kawaii to the painting and drew on some flowers in pink and a bunny’s head in white acrylic 3D liner “pens” (actually plastic squishy tubes with a small opening).  I quite like it and would like to combine the kawaii with the abstract.  It’s not finished yet and would like to work on it more, but I thought I’d like to share to you what I’ve been doing so far. 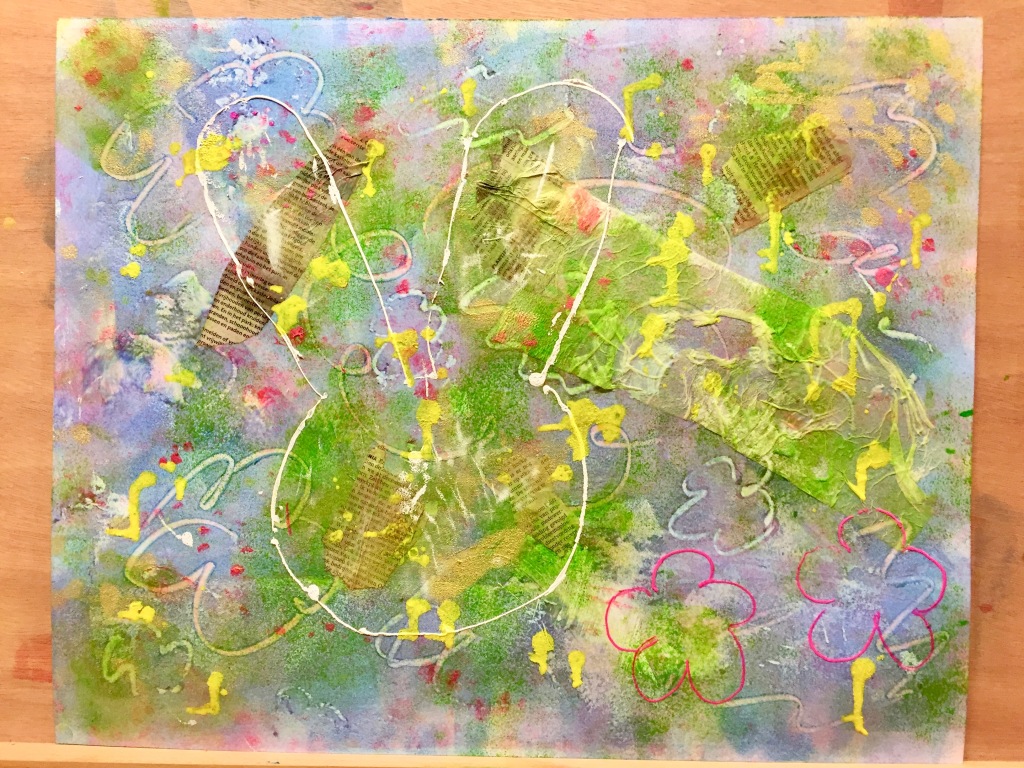 I neither take it personally at all nor take it as a criticism as such, but Dieter was not too keen about me drawing figures.  Or at least he was trying to steer my mind away from drawing precise shapes and objects and focus more on creating random effects using a combination of various mediums.   So for the second painting, I decided to break away from drawing and be more daring with the painting.  Go a little crazier.  I began with rolling on some bright yellow paint as background, followed by some metallic copper and red gold.  Unfortunately, metallics don’t show up very well on photographs but here is the idea.  And then some purple which certainly adds to the accent.  Bubble wrap prints are another way to add some coolness to your work which I already use in my stuff too.  Then I scribbled on some pink 3D liner lines across.  Once again, I still need to work on this piece so it’s also another work in progress!

I have to say I find abstract painting quite an exciting experience.  Always nice to experiment and go a bit crazy for a change.  As Dieter remarked, I do get a bit hung up with details and being precise so it’s good to let loose and paint how your mind flows.  But I do find it difficult to turn off my kawaii switch!  Kawaii is my style.  The class though teaches me to speak my mind on paper as well as grasping new painting techniques and feeling free.  In the end, it’s really up to me how I choose to incorporate it in my work.  And now, I have my other art lessons this Friday with Sugawara-sensei.  Focus then on precision and reality in my drawings.  Would be interesting to see how I would be able to switch!