As I was driving in the village the other day, I came across a motorcyclist trailing behind me. It was a sunny afternoon. And accompanying the motorcyclist was another passenger not huddling behind him but instead sitting beside him in a side car! How cute is that, I thought. It’s not often that we come across side cars, is it? Of course I had to paint about it when I got home!

I wanted a kawaii anime style for this theme. Whilst cars and motorcycles tend to be “heavy and solid”, I thought a soft bright mood would be an interesting change. I then opted for watercolor as painting to achieve this. Grabbing my sketchbook, I drew in 2B pencil my draft. I do like the Strathmore Watercolor Sketchbook which has good quality paper at a thick 300 gsm. The pad has just 12 sheets and doesn’t come cheap so I add only the best drawings which are straightforward already-thought out ones that doesn’t involve experimenting. And one of them was definitely going to be this. Little One in her kawaii bunny helmet and goggles accompanied by Tiny Teddy on the side. How much cuter can we get?

Whilst in Tokyo, I bought a pan of bright fluorescent watercolors from Kissho Gansai Tanbi range called Lumi Accent Color. Am mighty impressed with the traditional Kuretake Gansai Tanbi set and have used the stuff on many occasions so was excited to see the fluorescent colours. Here was an opportunity to try them! I used them also alongside the traditional range. 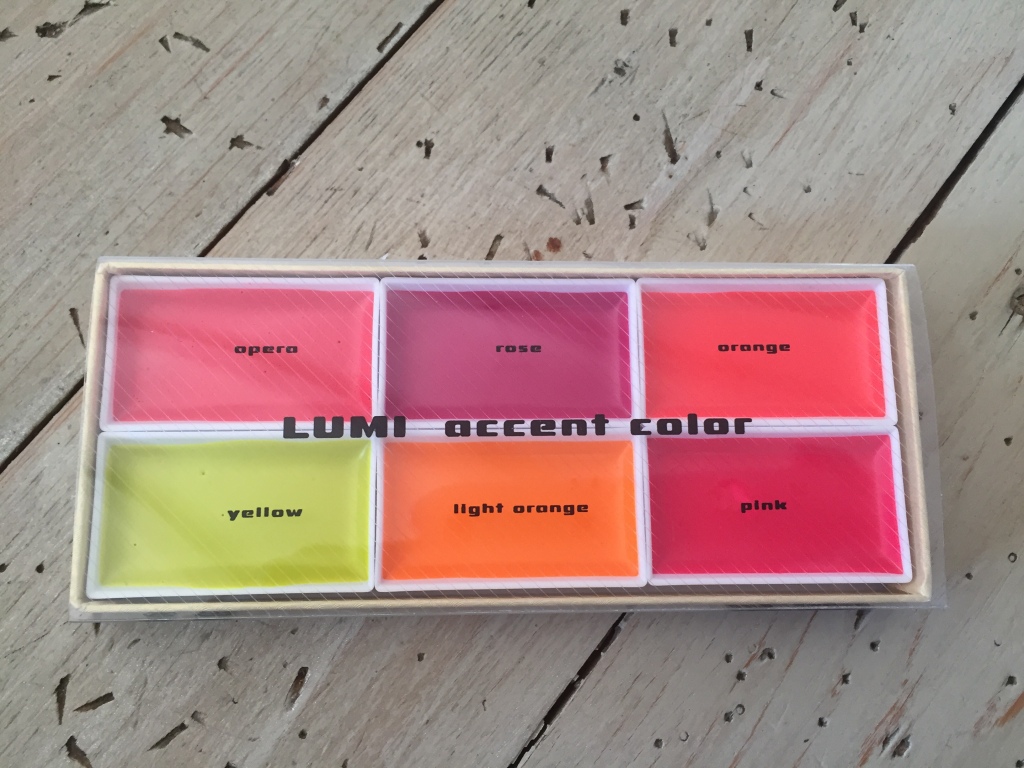 It worked really well, I must say! The neon pink helmets and outfits came out vividly. Although I used the yellow for the vehicles, they somehow turned out green! Not to worry, I actually think green suits the pink better as they complement each other more. Besides, Little One and her Tiny Teddy look so adorable anyway! They’ll really stand out in traffic and no one can miss them for sure. How’s that for safety first? One doesn’t need to use much from the watercolor pans as the pigments are so highly concentrated. And even when diluted with lots of water, the colours still give a pretty hint of shade. That’s the beauty of the Gansai Tanbi watercolor. They’re so well pigmented with natural ingredients. Combining the fluorescent Lumi Accent with the traditional Gansai Tanbi pans naturally go well. And here is the kawaii completed piece.

I am pleased that the painting turned out well, even better than expected! Using watercolors, as opposed to say acrylic or even ink markers, certainly gives a softer look which I had wanted to achieve in the first place, I’ll definitely be using these neon colours for sure especially in the warmer months!