The other evening, I was reversing into our driveway.  It was rather dark and misty, which I am not accustomed to driving in.  Upon glancing at the dashboard screen of my rear view camera, what do I see staring blankly straight at me?  Our neighbourhood cat!  Clearly standing standing in a midst of haze with my rear lights on, she looked quite spooky, even like a ghost!  I was nevertheless worried for her safety and trying to avoid running her over.  But she cleverly leaped out of the way immediately.  As I opened the door I sweetly greeted her.  She continued staring blankly at me, and with those eyes!  Glowing in the dark.  What a cool inspiration for my next painting that would be!  How could I resist?

I firstly sketched the cat and drew a “cloud” around her to create a mysterious aura.  Sketchbook is my usual Strathmore Mixed Media pad (190 gsm) with a smooth velour finish.  Realising that I had forgotten to prime the paper with gesso, I gently brushed on some clear transparent gesso on top of the pencil sketch.  I figured any stray pencil marks including the “one third rule” lines would be painted over anyway. 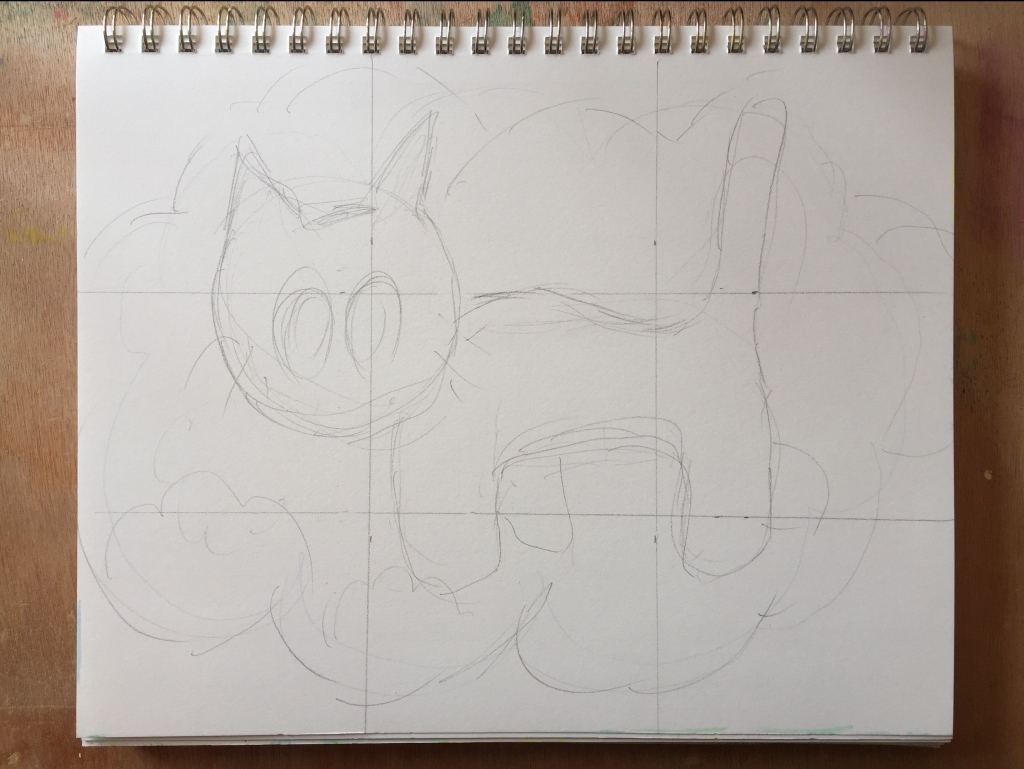 I wanted a murky background behind the cat.  Something grey and mysterious.  In addition, how about adding some texture too?  Finding some old newspaper lying around, I tore small bits and glued the randomly around the cloudy area with some gel medium.  Also made a point of letting some of the newspaper bits overlap the cat drawing for a more connected effect.  Covered the newsprint with a thin layer of white gesso.  Fingers crossed that this may help create the mood I was looking for!  And it worked fine as seen later on. 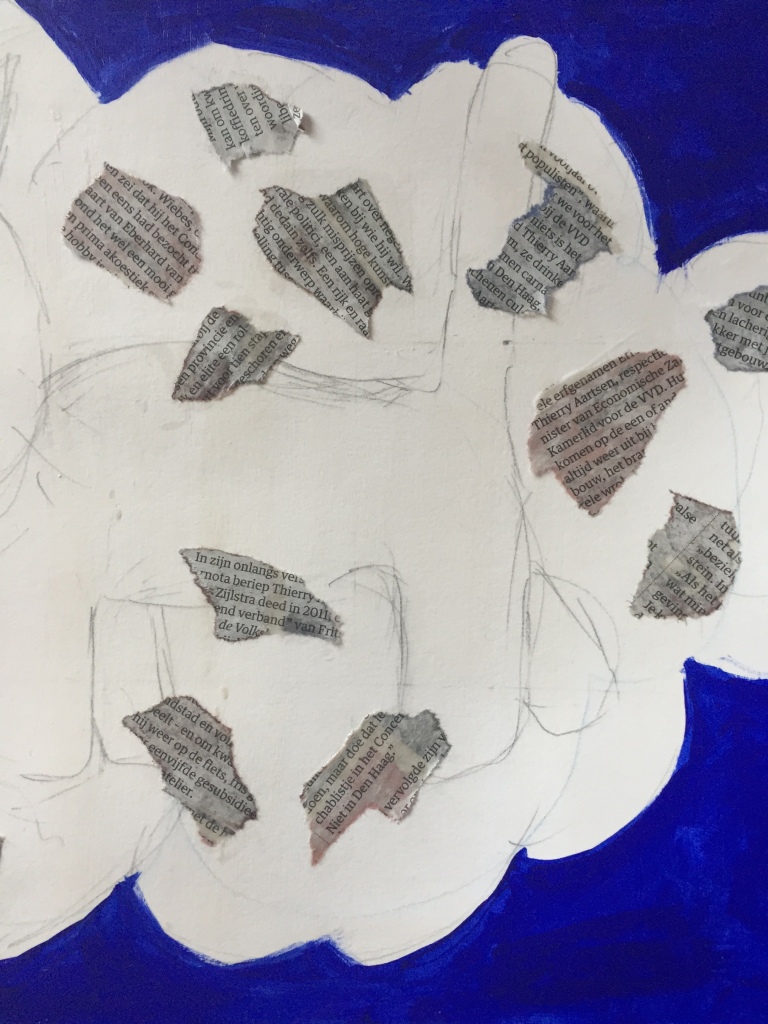 Colouring:  Contrast between Misty and Glowing

I wanted to achieve a three-tiered look.  A glowing cat in an eerie cloud of grey mist in turn floating in a background of darkness.  So first I applied some Dylusions acrylic paint in Midnight Blue for the outer background, along the edges.  Then the cloudy part was dabbed on with a hard brush a combination of Slate Grey (also Dylusions) and Titanium White (Amsterdam Acrylic) with a dash of the Midnight Blue.  For the green bushes, I replaced the blue with Dry Martini (Dylusions) still combined with the grey and white.  And now the cat.  I used Squeezed Orange (Dylusions) throughout.  I made sure the eyes would look really glowing and opted for a fluorescent green paint mixed with some fluorescent yellow.  After letting it all dry, I added the small details like the collar and whites of eyes with acrylic markers (Molotow and Amsterdam Acrylic).  These markers were also used to dot in the outline of the cat and the green bush.  And now! 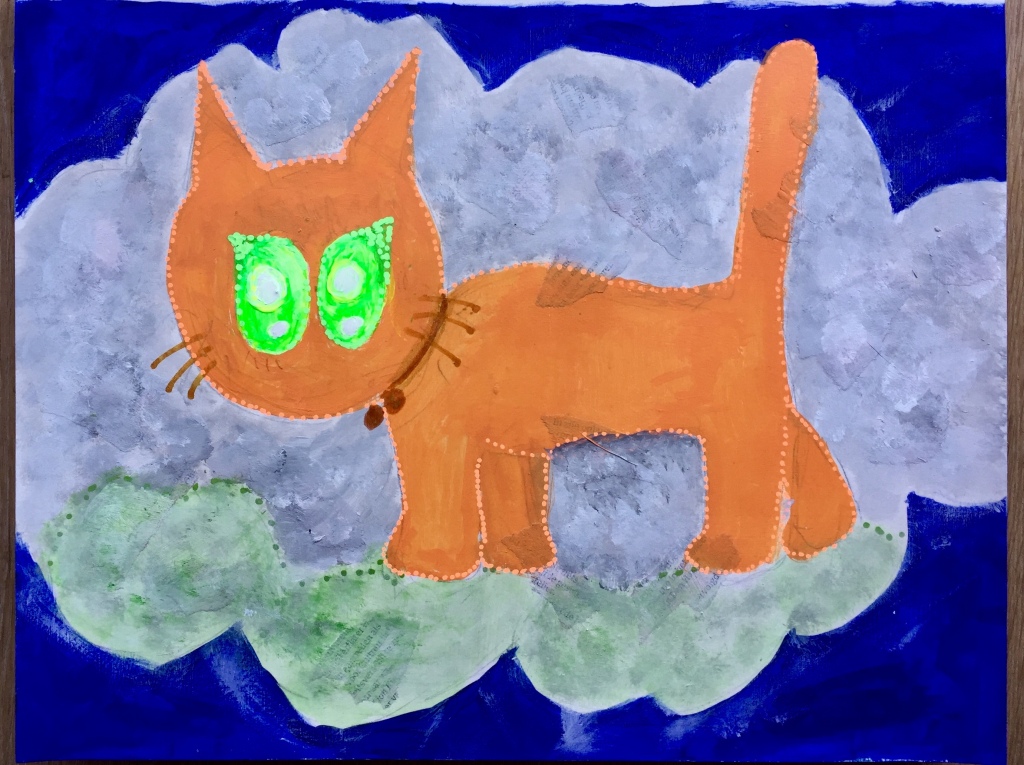 It’s not often that I get to create a dark nocturnal background, and I must say I love it!  And the misty mood is also quite new to me.  The most challenging though was achieving the “cats eyes in the dark” look, especially with the anime twist.  Nevertheless, I thoroughly enjoyed the various challenges and trying something different.  Always wonderful to discover new things.