Hello again! Yep am still alive and well. It’s been a hectic week in Tokyo working, running errands, visiting family and seeing friends again. So you can imagine there was little time to create some stuff at all! I certainly missed that a great deal and couldn’t wait to be back and start again.

Before I left Japan, I worked on this mixed media piece which I hadn’t the chance to write about. It’s been a while since doing any intuitive art so when I got around to doing that, I went crazy and in the end decided to make it into something flowery.

I haven’t used my Dylusions ink sprays in ages! Nearly even forgot I had them. Took a selection of them in pink and blue shades including the shimmer ones and had a go with them on my sketchbook (Strathmore’s Mixed Media paper) and blew the excess ink with a straw for some effect.

I then took a stencil, randomly choosing one with dots, and sponged on some magenta Distress Ink over it. Realising that the colours were getting a bit too dark for my liking, I stamped on some random flower patterns and bubble wrap prints with pink Distress Oxide ink. It was then I decided I wanted to pursue a flowery theme, something I again have not done in months considering it’s not been the season for it! 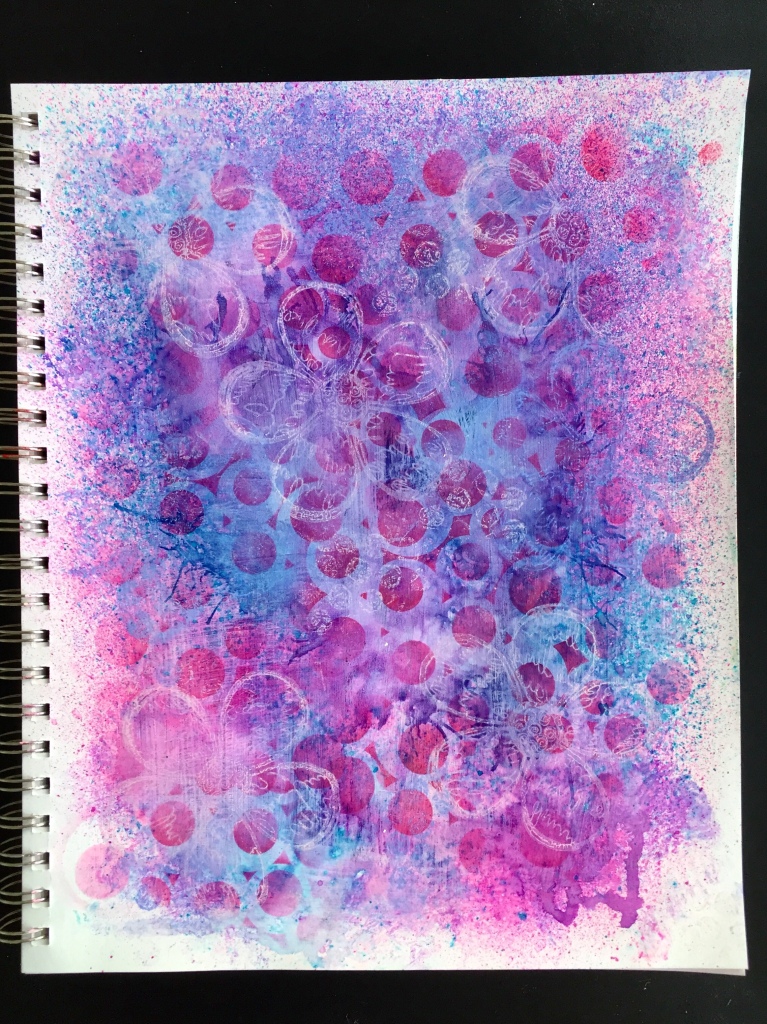 With more flower-themed rubber stamps and ink, I continued adding more. Then I was inspired by the large flower in the middle and decided to work around it. How about a bridge below it? And have more flowers around it? That flower could be bright yellow as a complimentary shade against the background and the bridge a rich orange to contrast the blue-ish shades. Where I wanted painted, I brushed on some white gesso to prime the area

I tried to paint the flower as brightly yellow as possible even using fluorescent yellow but it wasn’t easy. The darker inks in the background would just keep showing through! So I made up for it by doodling in some dots and a spiral using a pink acrylic marker. And with the marker scribbled in another flower. I also went over the ink-stamped flowers with both the pink and yellow markers. Finally, I thought gluing on some flower-shaped cut-outs would make a lovely finishing touch using craft punches and original paper for some Japanese flair.

I created this piece a day or so before leaving Japan which may explain the rather cute Japanese look. Now that it’s March already, we can look forward to the Spring and create more brightly-coloured flower-themed stuff. I can’t wait!

🌙 EVENING GLOW. Little One is back again! Sharing with you another fun mixed media painting I made whilst following another of Juliette Crane’s fun painting class. This time, I created a night theme in which Little One is in her garden enjoying the full moon! How sweet is that 💖
🐈‍⬛ BLACK CAT ON BLACK. Inspired by another art student's painting, I made my own version. Negative space was created on black paper to end up with a black cat! Colored charcoal by Cretacolor worked so well for this. Isn't my little black kitty so adorable? 🖤
🍰 CAKES AND ALE. Following Tracy Verdugo’s “Abstract Mojo” classes again. This time the theme is Archetypal Symbols in which we research and incorporate symbols in our artwork. Of the six mini paintings, this is the final one! I just thought the symbol of "cakes and ale" was cute then got curious as to the meaning of the phrase. Originating from William Shakespeare in his play Twelfth Night: “Dost thou think, because thou art virtuous, there shall be no more cakes and ale?” it implies pleasure and enjoyment of the good life. Well there you go! 🍺
💕 BUNNY AND TEDDY LOVE. Today sharing some art journaling! It’s not often I get to do this and what fun that was. Here I got to play around with a variety of mediums including oil pastels, liquid watercolors and Ecoline inks! And now Bunny and Teddy are in love. How sweet is that! ❤️
🖤 SUMIE GIRL. I don't like wasting good inks and paints when I end up with leftovers after finishing a painting. So I had a go with some excess Sumie ink and sketched Little One on a page which had already been smeared with some leftover watercolors. Not bad for the first attempt without using pencil beforehand. And how adorable does she look! 💙
🐯 DISGUISED AS TIGERS. This kawaii painting of a cat and mouse turned out to be more tiger-esque, perfect for 2022, the Year of the Tiger! And what do you know, little kitty and mouse decided to dress up as little tigers to pray for a better year and wish you all a healthy and prosperous 2022! ❤️