Mini Me was a bit under the weather the other day in terms of mood and mind. Monday and Tuesday I was a bit grumpy for one reason or another but that went away when I joined my friends to go to the Creadoe arts and craft fair the next day. Glad I went in the end. Then on Thursday it rained so heavily and if that was bad enough, my roof began leaking! Finally got that sorted and now so far so good. So here is a painting I worked on that sums it all up!

The clouds were coloured in greys using Neocolor II water-soluble pastels. For the face I used Jane Davenport’s watercolour palettes which already includes skin colour. A bright pink watercolor pen by Akashiya Sai was used for the outfit. As for the hair, I drew them in using 3-4 different brown shades of aquarelle pencils before blending them lightly with a wet brush. The lighting bolt was filled in with gold Gansai Tambi Japanese watercolour. Finally, I painted the background with a wash of Hydrus watercolour diluted with water. Just one drop of this magic goes a long way and enough to cover an A4 pad. 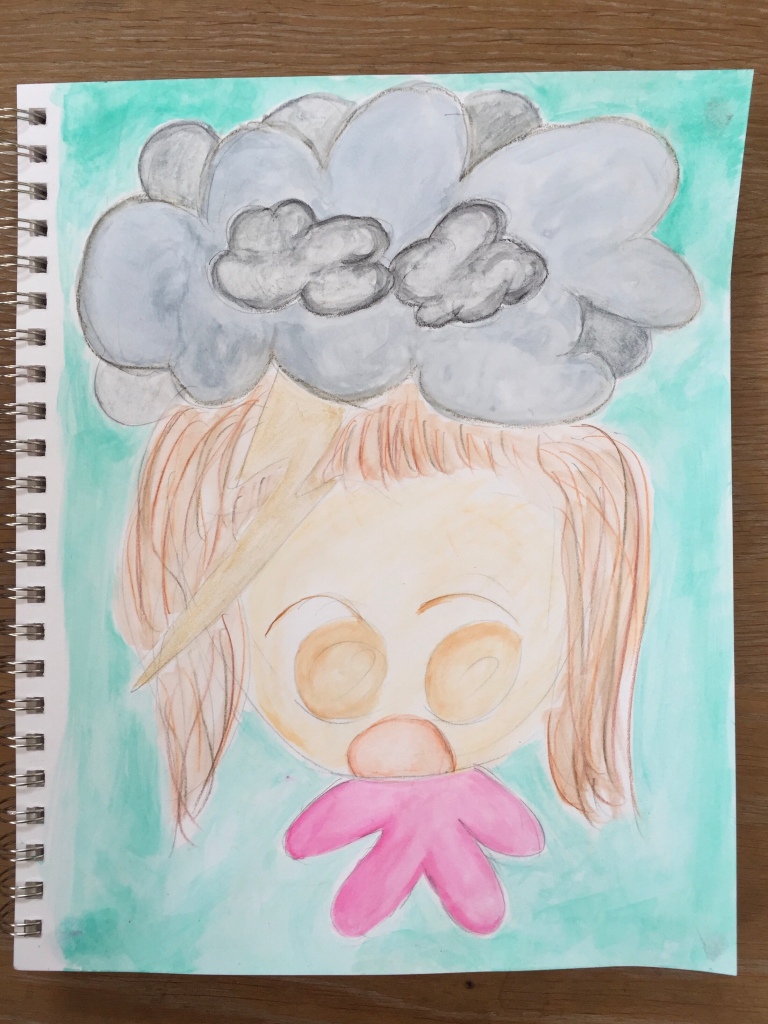 Finding the gold shade of the lighting bolt a bit too weak, I brushed on top a coat of Dr Ph Martin’s Radiant Concentrated Watercolor in yellow to give some vividness. Then experimented with a number of other media such as collages for the clouds (bits from a Japanese newsletter) and outfit (flower-shaped cutouts of origami paper). I also stamped on top of each other some swirly shapes using blue and turquoise Distress Inks to create some water-inspiring patterns. Then doodled some details in and around the clouds using a white Uni Posca pen. And now:

In times like this, painting certainly gives me a peace of mind. I was in the mood for something light and simple yet effective and intriguing. Soothing yet uplifting. And hence watercolour, in forms paint and water-soluble media, worked really well. Once I felt more energized, I grew more enthusiastic about going further with collages and stamping. And now I’m feeling tons better!