About a week ago, I was walking to the tram stop and on my way I came across a dog with a chewing toy in his mouth. Now why I say “a chewing toy in his mouth” rather than just simply “chewing” is because this toy was a rubber doll! Poor doll. It was of course a rubber doll meant for chewing purposes, but I couldn’t help feeling sorry for the doll. I mean, why not chew on a rubber ball or simply a bone for that matter? Which inspired me to paint… how about if the dog were playing with the doll instead? Now how kawaii would that be?

I firstly primed my paper (Canson’s Mixed Media A4 paper, 300 gsm) with white gesso to smooth out the rough texture and also since I was going to paint with acrylic. With my 2B pencil, I then drew the doggy large enough to fill the paper. And added the kawaii dolly as if she were riding the doggy and not being eaten! Looking promising so far.

For colour scheme, I planned to use primary shades of red for the dolly’s dress and blue for the background. It was then decided that for the rest I go for neutral colour. I was in the mood to paint the dog grey. And so I used Dylusions acrylic paint in Slate Grey with a bit of white to tone the darkness down. It was also a good chance for me to work on my light and shade techniques to give doggy some dimension.

I began painting the dolly using markers like acrylic pen and Faber Castell’s Pitt Artists Pen. Unfortunately I got a bit carried away with the hair by making it too big, and it started to look silly. You see, am accustomed to the big hair look on the Little One and exaggerating its volume but realised I’m supposed to be painting a small dolly instead! I initially panicked but tried to compose myself and cover up the error with white gesso. Think of it as using White Out or Tipex! Had to mention this mistake to remind myself (as well as readers) that if such happens, don’t despair. Just breathe deeply, stay calm and carry on. Besides, I so had to share this photo as well. Looks like she’s getting her hair shampooed, too cute! 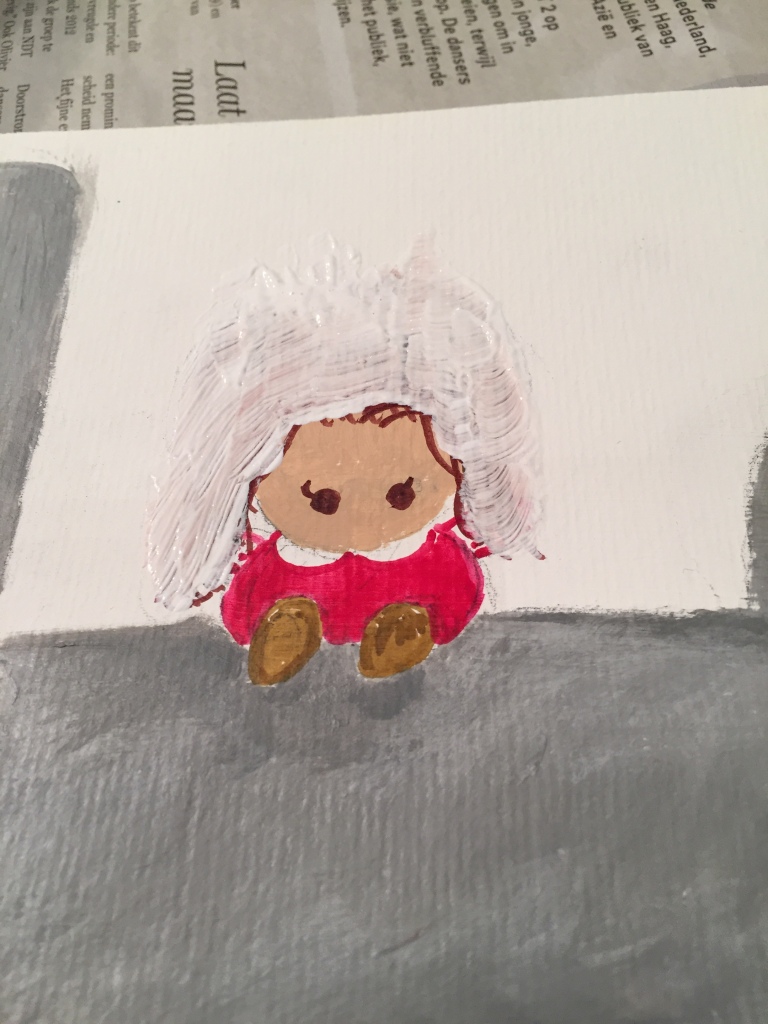 Whilst getting the gesso to dry, I continued painting around it. The background was a good start of course. Having blue in mind, I experimented using different kinds of blue in different acrylic types. I combined Dina Wakley’s paint by Rangers in Ocean with some fluid acrylic in Cobalt Blue and scumbled away for some multi-toned effect. I even added a tad of light blue acrylic ink. The edges around the doggy and dolly were quite a challenge, as I was carefully trying to scumble as close to the outline borders as I could without going over them or leaving a gap. After successfully completed that, I painted in the doggy features. The collar was originally going to be yellow but I discovered that this bright colour would draw too much attention to it and distract the dolly from being the prime focus. I then replaced the yellow with brown and added red hearts to match the dolly’s red dress! Finally I was able to restyle the dolly’s hair with a cute bob with bangs like a little girl. Finishing touches like the dolly’s eyes and shoes were jotted in with Faber Castell markers (India Ink) as I didn’t have any acrylic markers handy. Never mind! The idea is to make the painting cute, right?

It was great going back to painting in mainly acrylic again, as recently I’ve been focused quite a bit on ink and mixed media as well as coloured pencils. Furthermore, it’s also not like me to use primary colours and neutral shades only. Quite a refreshing change, actually. Despite the earlier catastrophe with dolly’s hair, I had a lot of fun painting this. Mistakes are part of learning, and I’m proud of myself for persevering. And it’s always fun of course to create anything kawaii!

💐 EARLY BLOOM. Spring is soon to come! Well, it seems as if it came a bit earlier than expected. After a week of snow a couple of weeks ago, temperatures suddenly soared to about 15℃ feeling like Spring 🌸. And when I was going for my morning jog the other day, I spotted a few flowers springing up already! I then decided to create some digital painting here with an abstract twist. Great practice! 💕
💖 IT'S WARMING UP! Today I’m sharing with you a colored pencil sketch. And why call it "It’s Warming Up”? Well temperatures here in the Netherlands have suddenly soared from being a snowy frozen two weeks ago to an almost Spring-like 16°C ☀️ And now Little One is getting her Spring clothes out preparing for the warmer months ahead because coming Monday will be March already! And another is that my color pencil sketching has gotten quite rusty as it's been a while and hence this drawing is a warm up to ease myself back into them. Must say it was fun and didn't turn out badly. Little One in fact looks so adorable and kawaii! 💕
🐈‍⬛ THREE LITTLE KITTENS. Over the years, I’ve come across quite a few little cats roaming in the neighborhood! Most likely they belong to neighbours and are let out so they can wander around freely. I’ve familiarized myself with a few of them because they are so adorable! There is naughty Ginger then Bram the grey cat that belongs to the lawyer downstairs in my old apartment and a random black one occasionally spotted by the local supermarket. And I thought this would be a perfect opportunity to practice some digital painting! 🐈
💙 CELEBRATING WITH CHAGALL. Sharing a painting I made whilst following Lesson 3 Chapter 4 of Tracy Verdugo’s Story Painting Class! We made a Chagall-inspired piece with the theme “The Art of Celebration”. 🎊 Whilst adapting his style, we were to choose a happy celebratory moment in our life. I of course had a few but the most recent that comes to mind is when my boyfriend and I decided to move in together and buy our dream house last summer! 💛
🐶 DOGGY WALKING DURING CURFEW. The curfew in the Netherlands is still continuing till 3 March. But those exempt include those walking own dogs! Of course dogs need to be walked a few times a day even at odd hours so perfectly makes sense. And so Little One enjoys walking her neighbour’s doggy! Her neighbour is a health worker and when she has the evening shift, Little One is happy to help out 🐩. As she walks, she occasionally comes across Ginger the naughty neighbourhood cat lurking in the corner. How cute is that! And now a little painting about it... 🐈
💕 Following Lesson 2 of Juliette Crane's Serendipity I classes now! Just finished this morning creating my "collage paper" which I will be tearing up and using for my main painting. But it's too cute to tear up... 😞