Another intuitive painting session!  Whenever I run out of ideas to paint but am in a creative mood, I start by designing a random background and seeing what developments occur thereafter.  It’s all about taking chances and not being afraid to try something new and discovering the unexpected.  This piece was one of them.

I’m still crap at it and certainly need practice.  Sometimes, I ask myself why I even bother doing it.  Is it really for me?  But it’s so addictive!  Or am I simply addicted to experimenting?  This time, I tried with a square Gelli Plate and a “cell” stencil using two pink shades of Staz-On ink and overlapping the print.  Some bits turned out alright though.  But not sure about the square in the middle. 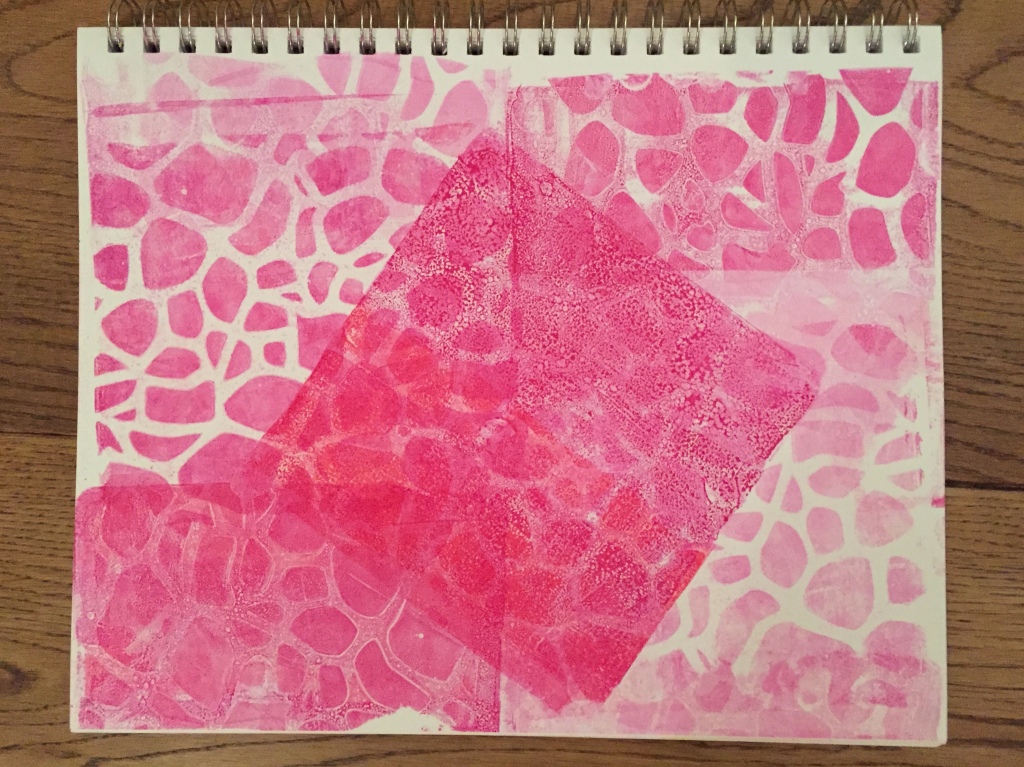 Normally, I would just paint over them by layering and layering and using gesso where it suited me until I was happy.  However, the patterns outside the square looked pretty cool and I didn’t want to lose them.  And then I looked through my heap of old collage pieces and cut-outs and found some green scrap which is actually a painting I did but did not like and ultimately cut up to retain for future projects.  Luckily I also happened to keep the corner bits so glued them onto the edges of the square using Gel Medium.  Then I spread some blue Ecoline ink on some sides before stamping some bubble-wrap patterns with purple Distressed Ink. 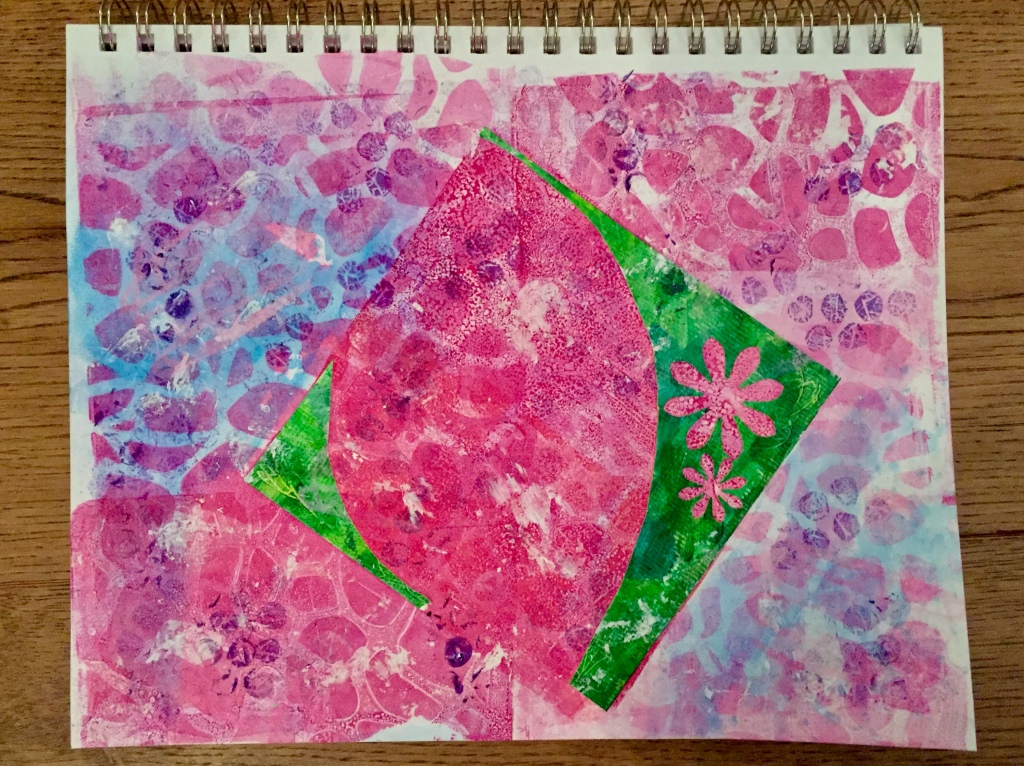 When in Doubt, Turn it Around!

But I was still at lost as to what to create out of what I just did.  Then just like a few paintings ago, I thought I should turn the orientation from landscape to portrait and work from there.  It looked much better especially since the flower cut-outs (from a previous painting) now stand out more in a better position.  I tried all sorts of things like layering with more ink, stamping in some white gesso with a tissue and even stencilled in from the same “cell” stencil when I messed up.  Then I decided to paint in the corners with the same green acrylic paint colours I had used for the scrap bit for the square.  I believe they were Amsterdam Acrylics in permanent green and yellow green.  Looking much better now. 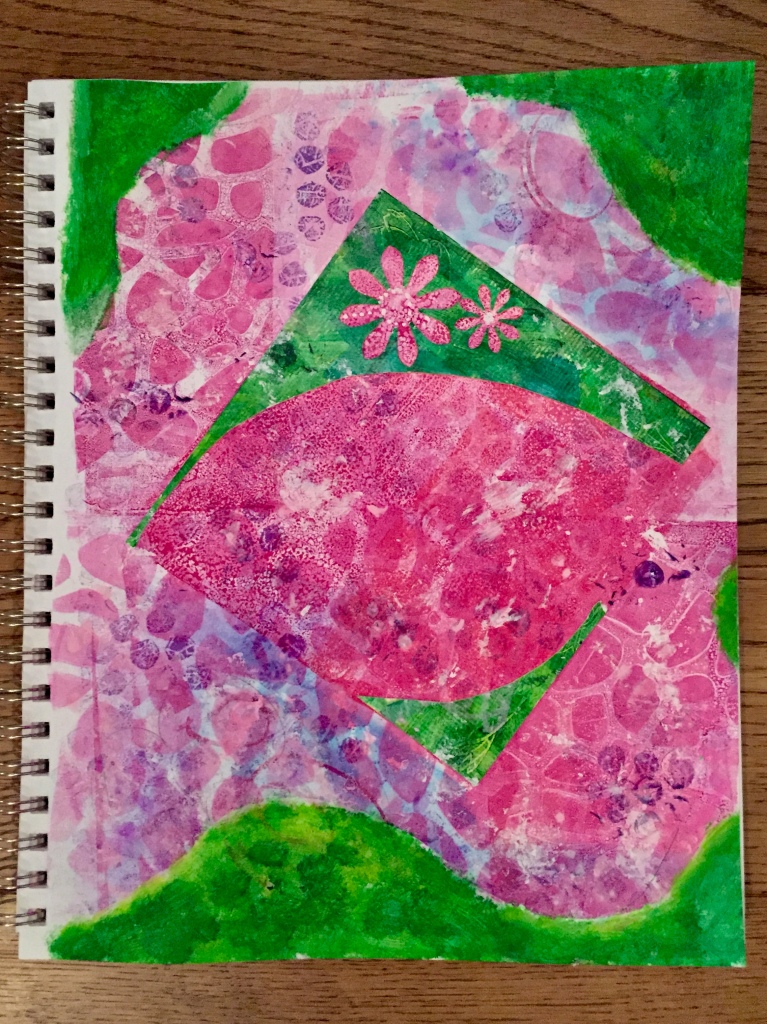 I then had some inspiration to add some flowery patterns in the painting, especially when I saw the purple “berries” from the bubble-wrap prints and the “hills” from the green.  So I outlined and enhanced them with the white Uni Posca pen.  And developed it further by actually doodling in the flowers too!  Now it looks much better and looks like a garden.  A magical one too. 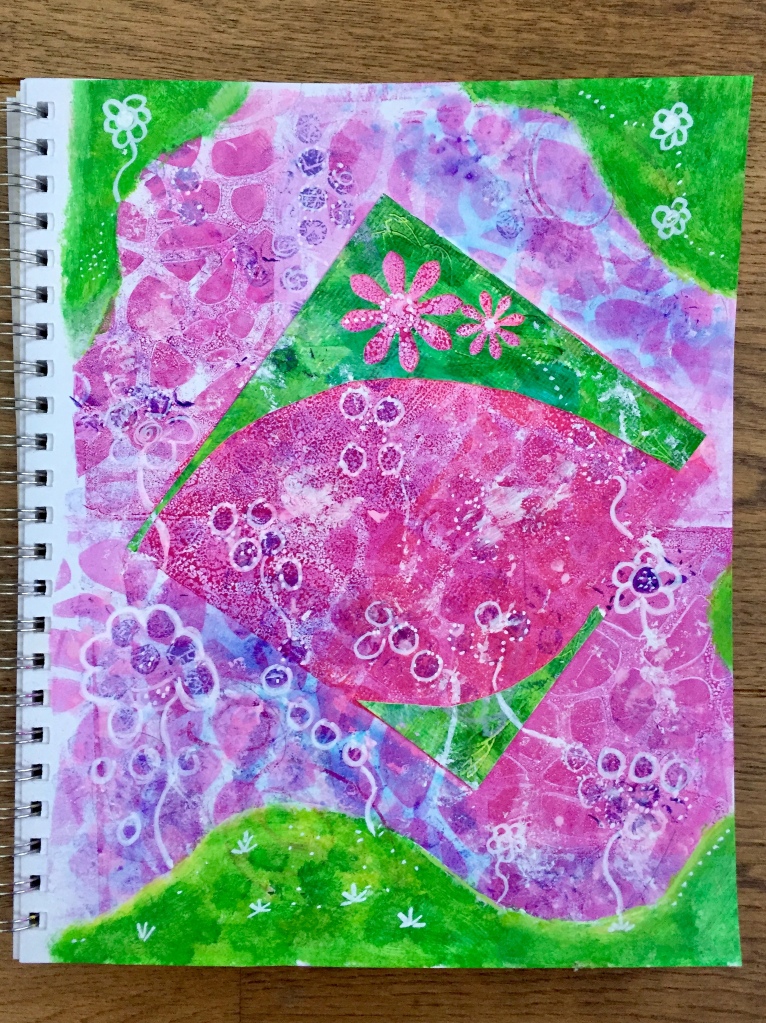 This is what I like about this kind of painting.  Rather than planned, you start with something you feel like doing such as practicing with Gelli plates or aimlessly spritzing some ink or writing something in wax crayons and taking it all from there.  When you have little or no inspiration or time at the moment, it is quite a wonderful way to create something.  It give me quite a satisfaction to surprise myself.