As I’m writing this, Japan is playing against Poland in the World Cup Soccer in Russia.  So I decided to sit down and do something creative in dedication to hoping my country would do well.

A huge fan of Hello Kitty, I got hold of some world cup plushes (stuffed toys).  I liked the cardboard boxes they came in so much too so I cut them out and made some photocopies of Hello Kitty dressed as referee, goalie and striker!

I took some ink in green and brown and started dropping some on the paper then spritzed some water on it with a spray.  Chose those colours since because of the football field.  And with an oil pastel scribbled “Go Japan” with the flag next to it. 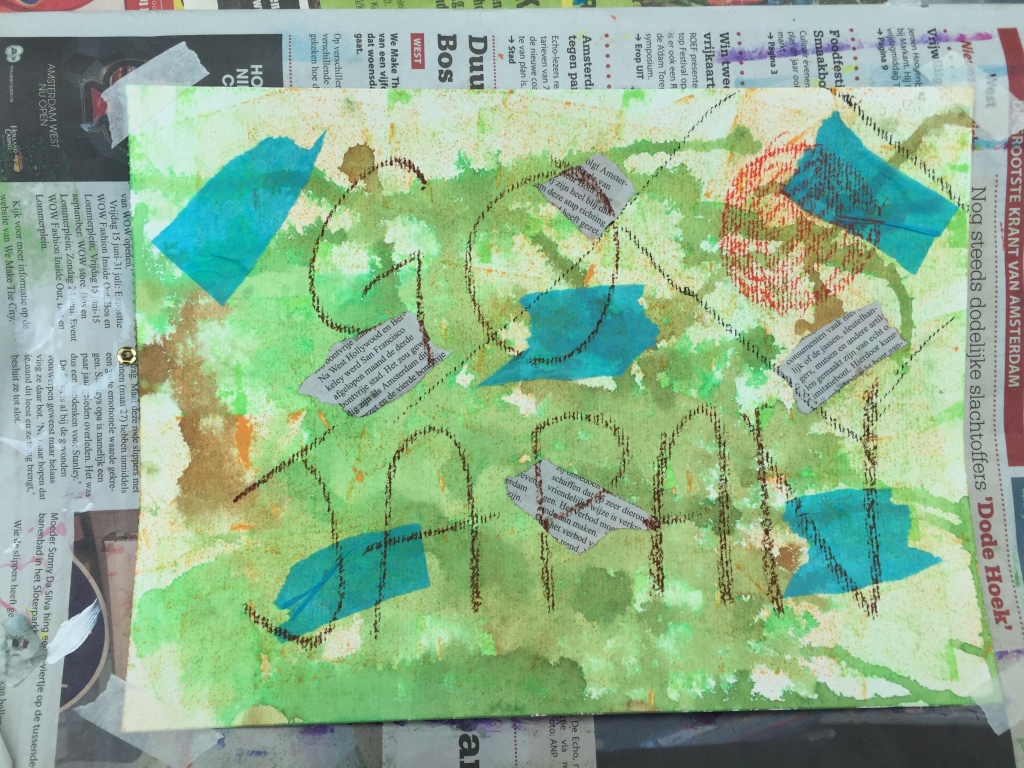 Next I cut out the Hello Kitty’s and glued them on with some matt medium, as I had done with the other collage pieces (newspaper bits and blue wrapping tissue).  Took two shades of yellow (Yellow Lemon and Yellow Medium) and white paint, and with some Gel Gloss medium I started painting around the Hello Kitties.   Because of the gloss medium, you could still see the green underneath.

But after completion, I realised I didn’t really like the positioning of the Kitties and composition of the painting.  I could’ve added some embellishments but there was just too much open space above the centre.  So I took another paper and washed it with some Brilliant Blue paint and some white as well.

I then cut out the Hello Kitty painting, made it a sort of heart/kidney shape and glued it onto the painted-blue paper, as if the game was played on the green field on a sunny day!  Finished it off with some ink stamping and added some more bits of blue wrapping tissue, not to forget some scribbles around the painting with some white ink including “Go Japan!”.